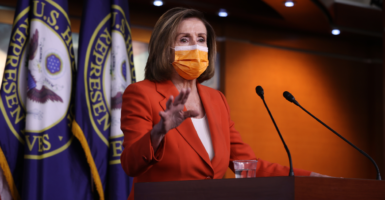 Speaker of the House Nancy Pelosi holds weekly news conference one day after Congress passed a $1.9 trillion stimulus package on March 11, 2021 in Washington, DC. As its many critics have pointed out, only 9% of the bill actually goes toward fighting COVID-19. (Photo by Chip Somodevilla/Getty Images)

By the time this column appears in print, Congress will have passed the $1.9 trillion coronavirus relief package. And that’s a shame. As its many critics have pointed out, only 9% of the bill actually goes toward fighting COVID-19.

One of the bill’s many non-COVID-related provisions is an $86 billion unconditional cash giveaway to a select group of multiemployer or union pension plans.

These plans have been grossly underfunded, not because of disease, but because the law allows private-sector unions and employers to make pension promises to workers without requiring them to set aside the funds needed to make good on those promises in the future.

By 2017, years before the COVID-19 pandemic, these plans had already accumulated $673 billion in unfunded liabilities, spread across almost 1,400 plans and 10.8 million workers and retirees. Many of those plans have continued to deteriorate in value even as the S&P 500 has increased more than 50%.

The multiemployer pension system is badly broken and requires a comprehensive fix — not a partial and selective giveaway that encourages further fiscal recklessness.

Fully 96% of workers and retirees with union pensions are in plans that are less than 60% funded. Only an estimated 13% of plans — 185 in total — will qualify for the cash in the relief bill. In other words, that $86 billion bailout will cover only the tip of unions’ unfunded pension iceberg. According to the Pension Benefit Guaranty Corp., the 50 most underfunded plans have $372 billion in combined underfunding. Systemwide, plans have promised $673 billion more than they have set aside to pay.

It is only a matter of time before most of these plans run out of money. This bill provides only a partial stopgap until 2052. At that point, most plans that received taxpayer bailouts will fail anyway, potentially leaving pensioners with mere pennies on the dollar.

Perversely, plans that get bailed out can end up exacerbating their shortfalls by increasing pension benefits and reducing employer contributions. The bill effectively encourages them to do just that in the short term so they can qualify for taxpayer funding. The CBO noted that as many as 336 plans could qualify for benefits, which could cost taxpayers far more than the projected $86 billion in bailouts.

Federal law has required single-employer pensions to follow sound funding rules. As a result, they are generally well-funded. One of those rules requires the plans to pay down deficits they accumulate, such as when they have lower-than-expected investment returns, by making larger contributions over a period of time — currently seven years.

The new legislation allows those pension plans to pretend their shortfalls don’t exist. This is like setting the minimum payment on existing credit card debts to zero even as interest charges continue accruing. In the end, whether employers recognize them or not, the shortfalls will still be there — and they will have grown larger with graver consequences for workers.

Although this bill begins with selective bailouts, it ultimately opens the door to upwards of $673 billion in union pension bailouts. If Congress bails out private-sector unions, will it then say “no” to retired teachers and firefighters, who are part of state and local governments’ $4 trillion to $5 trillion in pension shortfalls?

All told, pension bailouts could put every American household on the hook for more than $45,000 for other people’s unfunded pension liabilities, even as they try to save for their own retirements.

There are better ways to protect workers, retirees and taxpayers. They require holding unions and employers accountable for the pension promises they make rather than indemnifying their reckless and self-serving actions through taxpayer bailouts.

Rachel Greszler is a research fellow in The Heritage Foundation’s Grover M. Hermann Center for the Federal Budget.