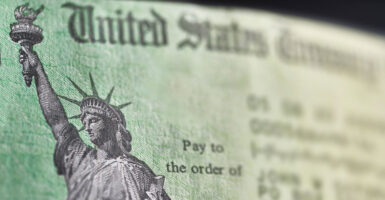 Congress is considering proposals for another coronavirus relief bill on top of the $4.1 trillion in aid already authorized. Politicians on both sides of the aisle are lobbying Senate Majority Leader Mitch McConnell and President Donald Trump to increase the cost of a package even further to include another round of checks to most Americans. (Photo: Bill Oxford/Getty Images)

Congress is considering proposals for another coronavirus relief bill on top of the $4.1 trillion in aid already authorized. Politicians on both sides of the aisle are lobbying Senate Majority Leader Mitch McConnell, R-Ky., and President Donald Trump to increase the cost of a package even further to include another round of checks to most Americans.

Renewing these so-called stimulus checks would be a mistake. The first round of checks were not a prudent use of taxpayer dollars and a second round would be even more wasteful. Here are five reasons why more stimulus checks aren’t the answer.

1. Despite High Unemployment, Most Americans Have Jobs

Sending checks out to a majority of Americans, regardless of work status, is poorly targeted to those who are actually in need.

For the 10.7 million Americans who are still unemployed, stimulus checks are an inadequate replacement for lost wages. The states’ unemployment insurance systems are better designed and equipped to get the appropriate aid to those who have lost a job.

Those systems can also be adapted to adjust to conditions on the ground, which vary significantly across the U.S., based on the level of restrictions state and local policymakers have imposed.

For the almost 150 million Americans who are still fortunate enough to be gainfully employed, another check from Washington is unnecessary. Americans who can work productively from home or are in industries that have benefited from shifting consumer demands may actually be financially better off than they were in 2019.

The economy is struggling because of government-ordered business restrictions and public fear of contracting or spreading the coronavirus, not because of a lack of personal resources.

Fewer opportunities to spend money on things like sporting events and cruises and over $1.4 trillion in federal funds provided through unemployment benefits, direct stimulus checks, and loans and grants from the Paycheck Protection Program have contributed to a surge in savings.

From April through October, Americans’ savings rate averaged 19.9% as households saved over $2 trillion. That’s more than three times the average 6.1% savings rate over the past two decades.

While some people are struggling—especially unemployed workers and small business owners in areas that have imposed excessive restrictions on people’s ability to earn a livelihood—many Americans have experienced increased disposable income and are saving at higher rates than ever before.

The federal government should not increase its debt and the burden on future taxpayers in order to boost households’ already record-high savings rates today.

3. Americans Are Paying Off Credit Card Debt at Record Levels

Through the first three quarters of 2020, Americans repaid a record-high $119 billion in credit card debt, according to a WalletHub Credit Card Debt report.

That’s great news, especially considering that the average household credit card debt is down 11%, or $950, from this time last year. But the fact that Americans are able to pay off such significant credit card debt suggests that the majority of households do not need stimulus checks.

While state and local policymakers that have restricted individuals’ abilities to earn a living and businesses’ abilities to maintain operation should provide their own targeted supports, it does not make sense for the federal government to increase its debt so that Americans can reduce theirs. After all, the federal government’s $220,000 debt per household is 28 times the average household’s $7,849 credit card debt.

Checks from the government simply do not result in the economic benefits their supporters often claim. The Great Recession reinforced this sobering lesson.

The government cannot spend its way into prosperity. At best, stimulus measures are ineffective. At worst, they can delay the recovery and prolong financial hardship.

For stimulus spending to work, new government programs have to, at a minimum, increase personal expenditures.

In 2008 and 2009, similar stimulus checks and tax rebates did not change broad measures of consumer demand, meaning there is no reason to predict that another round of stimulus checks would increase consumption and boost the economy.

People who are already saving at record-high rates and who are still hesitant to travel and participate in certain activities are unlikely to spend additional checks in economically stimulating ways.

When Congress was considering another round of stimulus in 2010, the Congressional Budget Office estimated that for each dollar spent on stimulus payments, the economy would only grow between 30 cents and 90 cents and would cost more than $160,000 for each job created. Sending checks to people who are already working is not a good investment.

A similar Congressional Budget Office analysis of the spring stimulus checks found that for each dollar spent on the stimulus payments, the economy would only grow by 60 cents, and that in the long run, the spring relief legislation in its entirety would “lower economic output, and reduce the income of U.S. households and businesses.”

One reason one-time payments may have little to no impact on aggregate trends is that many individuals and businesses spend and invest based on expectations about the future. People are smart. They know that adding another trillion or more to the national credit card means that taxes will have to go up in the future.

The $2.2 trillion in new debt that Congress has already authorized is the equivalent of $18,000 for every American household. Adding another trillion to that figure would mean every household would be on the hook for almost $26,000 of new debt.

5. Further Spending Increases the Risks of a Fiscal Crisis

In fiscal year 2020, the U.S. federal debt rose from 80% to over 100% of gross domestic product—a level not previously exceeded since World War II. This surge in debt greatly increases the United States’ risk of a fiscal crisis.

The tipping point for fiscal crisis is unpredictable, but once it occurs, it’s too late to backpedal to previously-available commonsense reforms. This makes it all the more important for any federal response to be timely, targeted, and temporary. The last thing Americans need is to replace the coronavirus pandemic with a debt crisis.

As the different experiences of individuals and businesses across the country demonstrates, blanket policies are not the solution.

Sending another round of so-called stimulus checks would be ineffective and wasteful. Instead, policymakers should reduce barriers to income opportunities and make it easier for individuals to earn their own paychecks.