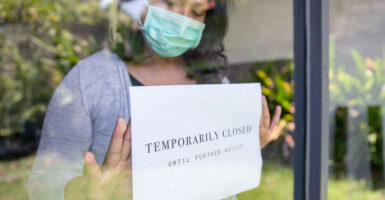 Bernard Zitzewitz is a student at Villanova University and a member of the Young Leaders Program at The Heritage Foundation.

The left’s crusade to raise taxes is likely already hurting the recovery, even if former Vice President Joe Biden and liberals in Congress don’t follow through with their proposed $4 trillion of tax increases. A general indifference in Congress to growing deficits makes things worse.

The profits from investments made today will be taxed tomorrow. Same goes for starting a business or going back to school for a higher paying job. People are smart. They know that absent true spending reform, taxes will have to go up to cover our projected $2 trillion annual deficit, irrespective of any pledge to not raise taxes on people making less than $400,000.

Biden’s campaign to repeal President Donald Trump’s “tax cuts for the rich” is nothing new, and obfuscates the mathematical fact that the left’s spending agenda will require higher taxes on every American, including middle- and lower-income Americans.

In the wake of the Great Recession, the Obama administration was fond of saying President Barack Obama would “fight to end” the “high-end” Bush tax cuts, although he didn’t succeed until 2013, when the top rate reductions were allowed to expire. Five years of uncertainty culminating in a tax increase dampened the country’s economic recovery from the Great Recession.

In 2011, Nobel-winning economist Robert Lucas pointed out that Obama “grudgingly says, ‘OK, we’ll keep the Bush tax cuts on for a couple years.’ That’s just the wrong thing to say. What I care about is what’s the tax rate going to be when my project begins to bear fruit?”

In other words, the five years of tax uncertainty were likely just as damaging to investment and job growth as the eventual tax increase.

Having not learned the lessons of history, we seem doomed to repeat it.

As the economy begins to recover from the devastation of COVID-19, lawmakers seem intent on making the same mistake as they did in the wake of the last economic collapse.

Most of the 2017 tax cuts expire at the end of 2025. And the only permanent part of the reform—the reduced corporate tax rate—faces the most criticism from high-tax crusaders. Just as the economy needs it most, the threat of higher taxes hangs on the horizon, threatening to deprive the economy of much-needed investment and entrepreneurs bringing new products to market.

According to a survey by PricewaterhouseCoopers, 70% of business executives polled said they expect business taxes to increase regardless of the result of the presidential election in November, with 57% saying they will “focus on tax scenario planning” in the case of a Biden presidency.

The types of long-term investments that support wage growth and new jobs benefit from stable expectations about future taxes and a generally friendly business environment where expansion and innovation are rewarded, not penalized.

Congress can lock in the economic benefits of the Tax Cuts and Jobs Act by making the reform permanent and reforming spending growth.

At the time it was passed, we estimated that making the Tax Cuts and Jobs Act permanent would increase the size of the U.S. economy by 2.75% over the pre-reform baseline—1.14% higher than if the reform was allowed to expire. When combined with full expensing of all investments—a change that is cost effective and easy to implement—the economy could have been 4.27% larger in the long run.

These simple changes could more than double the economic growth that was expected from the 2017 tax cuts in their current form.

Despite the economic potential of keeping taxes low, the free-spending consensus in Washington makes any pro-growth tax reform less likely to stay around. Even Biden’s proposal to raise taxes 8% over the next decade would not come close to stabilizing debt as a percentage of the economy. And that was before the pandemic response added trillions in new deficit spending.

By framing its runaway spending problem as a problem of insufficient taxation, Congress avoids taking the steps necessary to rein in entitlement spending and cut administrative bloat from the federal budget.

Without spending reform in Washington, businesses, families, and investors alike can expect painful tax hikes in the future. And not just tax increases on the “rich.” Look at Europe, where funding big government means high taxes on everyone. A lower-income European earning $40,000 pays $6,000 more in taxes—an extra 15% of their income—than they would in America.

Most Americans who make $40,000 don’t have an extra $6,000 to hand over to the government. Such a ramp up in the size and costs of government could have huge consequences throughout the economy as people would have to change where they live, what everyday goods and services they can afford, and whether or not they can financially support children.

The true rate of taxation is the current rate of government spending, as another Nobel Prize-winning economist, Milton Friedman, observed. Cutting current and future federal government spending is the surest way to fuel robust economic growth. But Congress appears uninterested in ensuring taxes stay low in the future.

The Heritage Foundation’s 2020 “Blueprint for Balance” provides a detailed plan that would balance the federal budget in six years by taking actions like reforming entitlement spending and cutting out unconstitutional government programs. This approach would give policymakers the freedom to continue pro-growth tax policy.

In this moment of uncertainty, Congress is only making it worse. Washington must work to bring the deficit under control, or we risk another sluggish recovery, with the threat of future tax hikes looming over every business decision and kitchen table in America.

The COVID-19 pandemic has exposed the need for tax reform that reduces uncertainty for businesses—large and small—and for families. By showing it is serious about rejecting unsustainable growth in government spending, lawmakers can foster the conditions for a strong economy in the coming years.