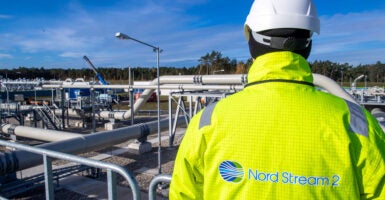 A Nord Stream 2 employee stands on a platform at the pipeline's receiving station in Lubmin, Germany, on Nov. 5. (Photo: Jens Buttner/Picture Alliance/Getty Images)

When President Barack Obama rejected a presidential permit for the Keystone XL pipeline, he concluded that “America is now a global leader when it comes to taking serious action to fight climate change. … And America is prepared to show the rest of the world the way forward.”

Then-Vice President Joe Biden was at his side, assenting to the decision in November 2015.

It was no surprise when now-President Biden made a point to again reject the permit for Keystone on Day One of his administration.

The decision has put him at odds with our Canadian allies, 21 states that have filed suit, American workers and labor unions who enjoyed good-paying jobs to build the pipeline, and the reality that canceling the pipeline will have an insignificant impact on global temperatures over the next century.

What is utterly baffling, then, is that Biden has not been consistent either with the vision to “show the rest of the world the way forward” or with his own administration’s recent policy decisions relating to the Nord Stream 2 pipeline construction project, supported by Russia and a small cadre of European governments.

The waivers marked a confusing about-face from statements by Biden that the Nord Stream 2 pipeline is a “bad deal” for Europe, and by Secretary of State Antony Blinken that there was “no ambiguity” in U.S. opposition toward it.

If completed, the natural gas pipeline would run from northwestern Russia to northern Germany and be operated by Gazprom.

Completing Nord Stream 2 is neither economically necessary nor geopolitically prudent. It would increase European dependence on Russian gas, magnify Russia’s ability to use its European energy dominance as a political trump card, calcify the divisions in Europe over energy that Nord Stream 2 has opened, and specifically undermine U.S. allies in Eastern Europe and central Europe.

While most of Europe opposes the pipeline, three influential European governments (Germany, Austria, and the Netherlands) continue to support its completion, despite a growing list of Russian outrages, many perpetrated on European soil. The issue is so clear-cut that stopping its completion has become rare a point of bipartisan congressional agreement.

As a matter of foreign policy, the Biden administration’s decision is tone-deaf.

If the administration continues down this road of acquiescence, it would be a historic mistake, squandering the significant diplomatic and political capital that it has expended to forestall Nord Stream 2’s harm to transatlantic security, while saddling the U.S. and Europe with a geopolitical millstone in its dealings with Russia.

And it makes the offense of rejecting the domestic Keystone XL pipeline that much more bitter for Americans.

The State Department under Obama published five environmental reviews of the pipeline, concluding it was environmentally safe and would not meaningfully contribute to global warming. A pipeline is the best mode of transporting oil to prevent accidents, and as Canada will develop the oil regardless, the only question is whether Americans will take part in the opportunity.

The southern portion of the Keystone XL pipeline, which did not need a presidential permit, created some 5,000 jobs and injected $5.7 billion into the Oklahoma and Texas economies. There are 2.4 million miles of pipeline crisscrossing the U.S., 72,000 miles of which carry crude oil.

Nearly every good and service Americans engage in—schools, hospitals, grocery stores, transportation, manufacturing, and so on—use energy like that being transported through pipelines such as the Keystone XL. The recent Colonial Pipeline cyberattack was a vivid reminder of that.

In 2015, when the Senate voted 62-to-36 on S 1 charging the Obama administration to approve the Keystone XL pipeline, Sen. Chuck Schumer, D-N.Y., said: “Time and time again, Republicans pledge their allegiance to foreign special interests above the American middle class.”

Schumer’s judgment then against a private Canadian company bringing jobs to Americans was misplaced. But he had no idea then how prescient that judgment would be of 2021 and of the Biden administration’s actions on Russia’s Nord Stream 2.