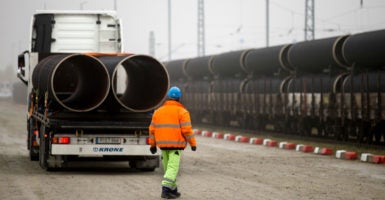 The proposed Nord Stream 2 natural gas pipeline, which will run alongside the existing Nord Stream pipeline under the Baltic Sea in northern Europe, would directly connect Russia and Germany by bypassing several other European countries.

This pipeline would only make Europe more dependent on Russian gas and more vulnerable to Moscow’s energy blackmail. The Trump administration should pressure Germany to not go ahead with the deal.

The project, led by Germany and Russia, has shown the deftness of Berlin toward its neighbors.

First, the project is to be funded through a joint venture between Gazprom, a Russian energy oligopoly, and five other European countries—but other countries like Poland are against the project.

Poland is not alone in believing Nord Stream 2 will undermine its national security, and, in fact, has the weight of eight members of the European Union who also declare that the pipeline will create “potentially destabilizing geopolitical consequences” for both Central and Eastern Europe.

Allowing the construction of Nord Stream 2 would be catastrophic for European energy security.

Ukraine, a major transit country for Russian gas, will be left to suffer the consequences if this pipeline goes into effect because Russia could then cut off gas to Ukraine without impacting Europe—something not currently possible.

This situation is not hypothetical. In 2009, Russia cut off supplies to Ukraine, increasing gas prices in the U.K. and putting other EU countries in a crisis situation.

In addition, as Politico reports, Germany would be dominated by Russian energy after Nord Stream 2, putting the nation in danger of Russian coercion.

Some in Europe have attempted to delay the pipeline in fear of geopolitical turmoil. The countries of Central and Eastern Europe understand the danger of Nord Stream 2. It is time that the U.S. come out publicly against this deal.

But it is not enough for the U.S. to just call for the cancellation of Nord Stream 2. The U.S. must promote global free-market energy policy.

The U.S. should work immediately and comprehensively to eliminate remaining barriers to U.S. energy exports to Europe. Good progress has been made on this front, but more can be done.

Energy diversification is a necessity to European security. As President Donald Trump stated in his address to the people of Poland, “We are committed to securing your access to alternate sources of energy, so Poland and its neighbors are never again held hostage to a single supplier of energy.”

The sooner Germany comes to its senses with Nord Stream 2, the better for European security and long-term prosperity.