Senate Approves Keystone: Up to Obama to Decide If America Is Open for Business 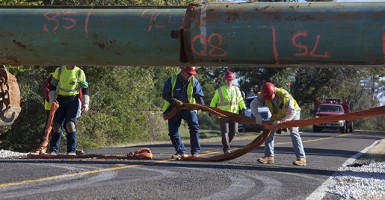 On January 29, the Senate passed S. 1, the first bill of the 114th Congress, approving the Keystone XL Pipeline by a 62–36 margin, including nine Democratic votes. The House passed its version of a Keystone XL bill earlier this month, leaving the chambers to sort out differences and send an agreed-upon version to President Obama.

The White House again promised a veto of the bipartisan bill that many have praised as the product of a new Congress that allows for free-flowing debate. The Obama Administration’s excuses over the past six years have all collapsed one by one:

Responding to the Senate’s passage of S. 1, Senator Chuck Schumer (D–NY) said: “Time and time again Republicans pledge their allegiance to foreign special interests above the American middle class.” The Keystone XL Pipeline permit decision should have never come to this point of political circus. Approving the pipeline should not be and is not about defeating or caving in to Big Oil interests; it is good energy policy that does not dish out special treatment and declares that America is open for business.