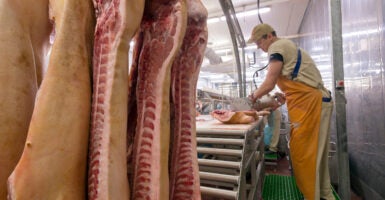 Meat prices have increased in part because there’s still high demand at grocery stores for meat, even as demand from restaurants that purchased far less meat during the COVID-19 pandemic has dramatically picked up. (Photo: IP Galanternik D.U./E+/Getty Images)

Last year, during the early stages of the coronavirus pandemic, there were reasonable concerns regarding higher-than-normal meat prices, including poultry.

There was nothing nefarious about the higher prices, just simple economics at play, and the harsh realities of a global pandemic.

And as expected, the resilient food-supply system came through, and prices came back down. The major meat shortages some feared never came to pass.

But we are beginning to see meat prices rise again. And here come the scare tactics.

The Biden administration and other “government first” proponents who want to “Build Bureaucracy Bigger” would have Americans ignore economics and facts, and instead buy into claims of potential corruption and high concentration levels in the meat-processing industry as the root cause of higher prices.

Let’s start with the most obvious point. Prices fluctuate in the market, especially due to the volatility in agricultural production and especially during a global pandemic. That’s evidence of nothing other than the laws of supply and demand.

So, why have meat prices increased?

In part, there is still high demand at grocery stores for meat, even as demand from restaurants that purchased far less meat during the pandemic has dramatically picked up. Increased demand from both domestic and international customers is occurring at the same time as supply-chain disruptions.

Farmers are experiencing higher feed costs, and meat-processing facilities are challenged with higher labor costs. These things, taken together, translate into higher meat prices. In other words, simple economics are at play, leading to higher consumer prices.

Amusingly, like someone saying something under his breath so nobody can hear, the Biden administration acknowledges “factors like increased consumer demand have played a role [in higher meat prices] … .”

They appear to understand the economics, but can’t help but get back to their “government first” agenda and blame the higher prices on a lack of competition and major private companies in the beef, pork, and poultry processing industries, which they suggest are unethical.

They can’t be, unless somehow the alleged concentration problem is just starting to kick in after a quarter-century.

Plus, the administration doesn’t explain why the U.S. Department of Agriculture projects food other than beef, poultry, and pork also to increase in price for 2021.  For example, prices for fish and seafood, and prices for fats and oils are expected to increase by 3% to 4% in 2021, the same projected increase as for poultry. It’s hard to blame beef-packers for higher seafood costs.

The administration is even ignoring the USDA’s reasoning for higher meat prices, and nowhere is concentration mentioned as a contributing factor.

But the most glaring omission from the administration’s meat attack is the failure to recognize how the federal government itself might have contributed to increased concentration in meat processing.

To be clear, high concentration levels in an industry if responding to the needs of consumers isn’t a bad thing, in and of itself.  In fact, high concentration can reflect the desire for economies of scale, greater efficiency, improved quality, lower prices, and innovation.

The existing federal meat-inspection regime creates high costs for meat-processing facilities and even imposes high costs on state-inspected facilities, whose meat is merely being sold in intrastate commerce (that is, within a state).

In general, to sell across state lines, a meat-processing facility must be a federally inspected facility.  All of these high costs work to the advantage of larger processors, who are better able to absorb the costs.

The effect of existing law is to reduce the number and types of processors that are available.  It also creates unreasonable restrictions on the sale of meat, hurting both farmers and consumers.

For example, there are 27 states that operate USDA-approved state meat- and poultry-inspection programs. As explained by the Department of Agriculture, this means the state programs meet and enforce requirements “at least equal to” those imposed under the Federal Meat Inspection Act, the Poultry Products Inspection Act, and the Humane Methods of Slaughter Act of 1978.

However, despite this equivalency, meat from these state-inspected facilities may only be sold in intrastate commerce, with limited exceptions.

That makes no sense.

And, of course, the Biden administration doesn’t mention the across-the-board regulatory avalanche it’s imposing and are going to be bringing for years. As higher compliance costs for businesses across the food-supply chain, from farmers to truckers, drive up consumer prices for food, that will hurt consumers, competition, and innovation.

But basic economics and the facts won’t fit into the narrative of “private companies bad, big government good.”

The Biden administration, like a magician, wants to divert attention from what’s really happening.  Policymakers and the public shouldn’t fall for the trick.