A Challenging 2022 Looms for Pentagon 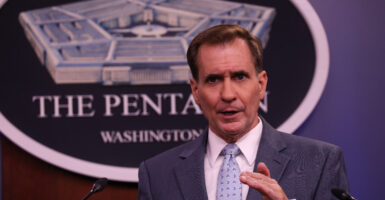 For the 2.7% pay raise due to take effect Jan. 1, the Pentagon will have to find about an additional $240 million per month to meet payroll from its other accounts. Pictured: Defense Department press secretary John Kirby speaks at a briefing at the Pentagon on Sept. 30 in Arlington, Virginia. (Photo: Yasin Ozturk/ Anadolu Agency/Getty Images)

With inflation surging and dim prospects for a full-year appropriations bill, 2022 is already shaping up to be a challenging year for the Pentagon.

Whether buying supplies for a New Year’s Eve party or filling their gas tanks, Americans are noticing that just about everything is more expensive.

So, instead of buying a cashmere sweater for mom and another for grandma, they settle for fleece pullovers. Others drive their cars less. That is what people do when faced with prices they cannot afford: They change their behavior and adapt.

The Pentagon, however, can’t stop on a dime. The Navy can’t dock a squadron of ships, and the Air Force can’t ground a fleet of planes. They have the nonnegotiable obligation to be ready at a moment’s notice, requiring constant training, large inventories of parts and ammunition, and modern well-maintained equipment.

Today, the Pentagon is operating under a budget request it crafted three years ago, when inflation was assumed to be about 2.2%. Now, it is 6.2%. That change, plus the uncertainty of operating without a final appropriations law, creates havoc for those responsible for ensuring our nation’s defense.

Inflation is chewing through billions of dollars in Pentagon funding. The Defense Department anticipated and budgeted for 10% inflation for fuel costs. However, gasoline prices have soared to the tune of 58% in 2021.

That difference alone accounts for close to $4 billion in unanticipated Pentagon expenditures.

When the country moves from 2.2% to 6.2% inflation, it creates a bill on the order of $30 billion for the Pentagon across its accounts—larger than the increase authorized by Congress earlier this month in the National Defense Authorization Act.

Congress has been unable to reach agreement on appropriations bills for fiscal year 2022, and thus, every federal agency is operating under a continuing resolution. Continuing resolutions limit the budgets to the levels that were appropriated in the previous year, usually without any allowance for changes prompted by the law, such as pay raises.

Thus, the pay raises for military personnel create an additional obstacle. Under law, pay raises for military personnel, based on the Economic Cost Index, are automatic unless stopped by Congress. Thus, for the 2.7% pay raise that is due to take effect Jan. 1, the Pentagon will have to find about an additional $240 million per month to meet payroll from its other accounts, mostly likely coming from accounts dedicated to maintaining readiness.

This unwelcome financial crunch is all taking place in a context of rising threats and of increased awareness of those threats by the American population.

Americans have been getting worrisome signs from abroad on a regular basis, from the disastrous withdrawal from Afghanistan to Chinese tests of a hypersonic missile and Russia amassing troops at the Ukrainian border and practicing gas coercion on Europe.

Further, there is a growing consensus in the country that China is the greatest threat to the United States. To properly stand up to China, the American military needs to be a contemporary and ready force, not one that is scrambling to cover the costs of inflation to maintain its aging equipment.

The way forward is for congressional appropriators to fund defense at a level similar to what was authorized by the National Defense Authorization Act, independently from other appropriations measures, and not as part of an omnibus bill. After all, providing for the common defense is a constitutional duty and an area of wide bipartisan agreement.