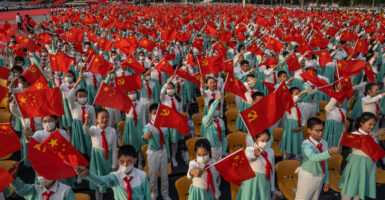 Chinese students wave party and national flags at a ceremony marking the 100th anniversary of the Communist Party at Tiananmen Square on July 1, 2021, in Beijing. (Photo: Kevin Frayer/Getty Images)

The Financial Times recently reported that China had combined two advanced missile technologies in a test of a new nuclear capability.

The test featured a so-called Fractional Orbital Bombardment System, which is launched into space and can orbit the globe before releasing a missile at its target. The Fractional Orbital Bombardment System was reportedly armed with a nuclear-capable hypersonic glide vehicle, which can fly at low altitudes and maneuver to its target once released from space.

First, the orbital hypersonic missile reinforces what we already knew: that the Chinese nuclear threat is only increasing. Ironically, nuclear disarmament advocates once held up China as a model, regarding China’s proclaimed “minimum deterrence” posture and “no first use” policy as worthy of emulation.

Earlier this year, House Armed Services Chairman Adam Smith, D-Wash., explicitly suggested the Biden administration look at whether we can “achieve the necessary level for deterrence for less money, like China has.

Clearly, however, China threw its commitment to these policies out the window years ago.

Over the last several months, it has come to light that China is building hundreds of new long-range missile silos that could potentially accommodate missiles armed with multiple warheads. According to U.S. senior officials, China’s missile forces could soon exceed Russia’s, and nuclear superiority over the U.S. is now a realistic possibility.

Second, the test reminds us that China has consistently advanced its nuclear forces despite years of U.S. restraint in developing both defensive and offensive strategic capabilities.

In that vein, the claim that China’s hypersonic Fractional Orbital Bombardment System is a response to the U.S. homeland missile defense system of 44 interceptors is counterfactual.

The U.S. has made only minor upgrades to its homeland missile defenses over the last decade; the relatively steady state of these capabilities cannot explain the rapid change in China’s nuclear posture.

Similarly, the U.S. has not made any advances in offensive nuclear weapons that could be provoking China’s nuclear expansion. U.S. nuclear forces have aged over time, and our nuclear modernization plans would only replace what we have on a one-to-one basis.

No, a more plausible explanation is that China’s nuclear ambitions conform with Chinese President Xi Jinping’s goal to transform China’s military into a first-tier force by 2050.

Third and perhaps most significantly, a hypersonic orbital nuclear weapon would provide China with specific military advantages, particularly because it could avoid U.S. early warning systems.

While the U.S. can detect most large rocket and missile launches, it might not be able to track a Fractional Orbital Bombardment System throughout its orbit, or even determine if a Chinese orbital system is armed with a nuclear weapon.

If effectively operationalized, orbiting a nuclear weapon through space could enable China to release the weapon from anywhere around the globe, exploiting gaps in U.S. early warning systems. Once released, the hypersonic nuclear vehicle can fly at low altitudes at hypersonic speeds and maneuver through the atmosphere, avoiding U.S. space- and land-based radars—further reducing warning time.

Some have claimed that this orbital hypersonic missile system does not truly change the threat we face since China can already strike the U.S. homeland with its existing arsenal. Yet the key difference is that the U.S. can largely detect and track those missiles, a capability that enables the U.S. to organize a retaliatory strike before incoming warheads reach their targets. This concept of assured nuclear retaliation is fundamental to deterrence.

However, systems able to avoid early-warning satellites and radars raise the prospect of a disarming surprise attack that cripples the nation’s ability to respond. This undermines the core of deterrence and, for this reason, such systems have been widely regarded as destabilizing.

While one test does not mean China is necessarily embracing a doctrine of nuclear preemption, the development of capabilities that might allow the mere contemplation of such an approach should be of great concern.

Furthermore, while some believe this orbital hypersonic missile capability doesn’t offer China military advantages, the dedication of time and resources toward it indicates that Beijing sees things differently.

As Sen. Deb Fischer, R-Neb., ranking member of the Senate’s subcommittee on strategic forces, questioned, “Why else would China pursue a new system like this? I find it difficult to believe China, or any other nation, would invest in a system it thought had no value.” She continued, “But, if they were building new nuclear-capable systems regardless of whether it really increases their capabilities—that wouldn’t be reassuring either. Any way you look at it, there’s real cause for concern.”

It’s time to stop giving China excuses and start viewing the threat with clear eyes. As the Biden administration continues its ongoing nuclear posture review, it should reject proposals to reduce the role of nuclear weapons. Instead, it should focus on accounting for advanced threats to ensure the U.S. can maintain strong nuclear deterrence.

This article was originally published at 19fortyfive.com