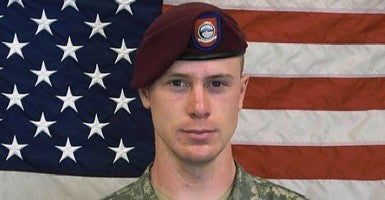 The nonpartisan Government Accountability Office said the Defense Department failed to notify the relevant congressional committees at least 30 days in advance of the exchange—violating a provision of the National Defense Authorization Act.

The Heritage Foundation’s Cully Stimson, manager of the think tank’s national security law program, previously coordinated the Pentagon’s global detention policy and operations, including at Guantanamo Bay and in Iraq and Afghanistan. Stimson has questioned the constitutionality the law in question. Nonetheless, he said, “that’s not the point.”

The GAO report did not touch on the constitutionality of that section of the law. The law was on the books, and the administration broke it. There is no remedy, no trial or no enforcement mechanism that will come from this [report], but it’s embarrassing for the administration.

GAO investigators also said the Defense Department used $988,400 of a wartime account to make the transfer.

Because the Pentagon’s use of funds hadn’t been expressly appropriated, the expenditure violated the Anti-Deficiency Act, the GAO concluded.

“In our view, the meaning of the (law) is clear and unambiguous,” the GAO wrote to nine Republican senators, including Minority Leader Mitch McConnell, R-Ky., and various committees. “Section 8111 prohibits the use of ‘funds appropriated or otherwise made available’ in the Department of Defense Appropriations Act, 2014, to transfer any individual detained at Guantanamo Bay to the custody or control of a foreign entity’ except in accordance” with the law.

Early this summer, the Obama administration released five senior Taliban leaders from detention at Guantanamo Bay in exchange for Bergdahl, who had disappeared from his post in Paktika province in eastern Afghanistan on June 30, 2009.

The five Taliban are to supposed remain in Qatar for a year.

At the time of the exchange, Republican lawmakers criticized Obama for not telling them about it before it happened.

Obama defended his actions, saying that if word of the deal were leaked out, Bergdahl would have been killed.

Bergdahl is currently on active duty doing administrative work at Fort Sam Houston in San Antonio while the Army investigates the circumstances surrounding his capture.