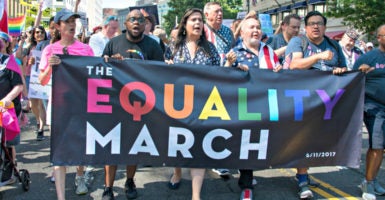 “Every dollar we spend on social engineering is one dollar less we are spending on defense,” Ken Boehm says.

They had expected that the new command, under President Donald Trump and Defense Secretary James Mattis, a retired Marine general, would revise if not reverse some of the Obama administration’s policies on transgender individuals in the military.

“I was very surprised, not so much by Donald Trump but by Gen. Mattis. I thought his total focus would be on military readiness and winning wars, and not social engineering,” Boykin told The Daily Signal.

The retired Army general argues that political correctness about both gender identity and women in combat is degrading the morale and readiness of the armed services by having troops spend hours in classrooms learning about gender issues.

“For 16 years we’ve been at war. When service members are not deployed overseas, they are preparing for war,” Boykin said. “Not one minute of preparation time should be squandered on social experiments.”

“[L]et us reflect on the service and sacrifice of all DOD members, past and present,” Kurta said, according to a Defense Department press release on the event. “We take pride in the contributions of all who defend and serve our country, and rely on the diversity of our members to meet our mission.”

Kurta is the Defense Department’s undersecretary of defense for personnel and readiness, a position he has held since 2014 under the Obama administration.

One group of conservative leaders, the Conservative Action Project, called for the Trump administration to “discontinue funding and directing personnel resources” for special interest events such as LGBT Pride Month that “do not strengthen military readiness.”

Some of those conservative leaders, including Reagan administration veteran Becky Norton Dunlop, say they understand that such programs likely have operated on autopilot since Trump succeeded Barack Obama as president Jan. 20.

Trump did not issue a presidential proclamation declaring June as LGBT Pride Month, as Obama did in the eight previous years.

Just before June, however, the Navy issued its own statement anticipating LGBT Pride Month.

“To remain the finest seagoing fighting force, the Navy needs men and women who are the right fit for the right job regardless of race, gender, sexual orientation, creed, or gender identity,” Capt. Candace Eckert, the Navy’s special assistant for inclusion and diversity, said. “Our goal is to ensure that the mission is carried out by the most qualified and capable sailors.”

“LGBT Pride Month is just one way that we can honor the struggles and achievements of the LGBT community, including the LGBT members of our federal workforce,” McGettigan, a 25-year employee, wrote June 9 on the Office of Personnel Management website. Her post provided related links for LGBT employees.

The Department of Veterans Affairs put up three large LGBT Pride Month posters in its central office in Washington. The agency printed 150 bulletins to hand out at an event scheduled June 22 at VA headquarters, Sterling Atkins, the VA’s diversity and inclusion specialist, told The Daily Signal.

As for the State Department, a spokeswoman told The Daily Signal that the department “issued guidance to embassies and consulates allowing them to, as appropriate to their local context, recognize LGBTI Pride Month.” The “I” in LGBTI stands for “intersex.”

The State Department did not provide specifics.

Conservatives interviewed say they particularly are concerned about the military, specifically with transgender recruits, because of what they consider issues of preparedness for war and unit cohesion.

“This puts extra burdens on military doctors and nurses who have to provide these hormone benefits and surgeries to service members who aren’t deployable for months. So, this becomes a magnet [for people seeking gender transition],” Elaine Donnelly, president of the Center for Military Readiness, a conservative pro-defense group, said in an interview.

Both the Republican Party platform and Trump as the nominee for president “vowed to eliminate political correctness in the military,” Donnelly told The Daily Signal.

“Military voters put trust in the president, but now there are so many Obama holdovers in the Pentagon making policy,” she said.

Donnelly, Boykin, and Dunlop were among 85 conservative leaders— including former members of Congress and former Cabinet officials—who signed a May 16 “memo from the movement” as part of the Conservative Action Project.

The memo raises similar concerns about government time and resources being devoted to “gender transitioning,” saying:

It must be difficult to suffer from gender dysphoria and confusion about one’s sexual identity, but concerns about these individuals do not justify mandates on military medical doctors and nurses to approve, provide, or participate in life-altering transgender treatment or surgeries. Many object to these experimental treatments on grounds of medical ethics or sincere religious convictions. …

[C]ontinuing implementation of the Obama transgender policies for service members would ignore the strongly felt concerns of women particularly, who do not want to be exposed to individuals of the opposite sex in facilities which offer minimal privacy. This grave problem must be taken seriously when the incidence of sexual assaults and rape in the military is so severe. …

The memo was signed by cultural, economic, and national defense conservatives because frivolous defense spending affects everyone, said Dunlop, chairwoman of the Conservative Action Project, who is the Ronald Reagan Distinguished Fellow at The Heritage Foundation.

“This is entirely at the feet of Secretary Mattis,” Dunlop told The Daily Signal. “The president clearly, just by watching him, is a delegator.”

Even so, Dunlop, who worked in the Reagan administration, said she understands the Trump administration may not be able to address related issues immediately. But, she said, she would like to see movement in the right direction.

“Things do take time, but we expect to see evidence of changes,” Dunlop said. “We have not even seen evidence of people put in place to make the changes at the Defense Department.”

Readiness and combat effectiveness are the priority, Lt. Col. Myles Caggins, a Defense Department spokesman, told The Daily Signal. He said the department, at Kurta’s direction, conducted a review of the military’s ability to work with new transgender enlistees.

In a statement provided to The Daily Signal, Caggins said:

Diversity is a source of strength for the Department of Defense, and is a key to maintaining our high state of readiness. Diversity encompasses more than demographic differences (e.g., race, gender, and sexual orientation)—we also value diversity of thought, background, language, culture, and skills.

“This is expected from the far right, and it doesn’t have any foundational basis,” Thorn told The Daily Signal. “There is no evidence that we’ve heard or seen that makes the argument that transgender people [in the armed forces] affect military readiness.”

Navy veteran Ken Boehm, chairman of National and Legal Policy Center, a government watchdog group, was among the signers of the memo. Continuing the Obama administration’s “social engineering” policies is fiscally irresponsible, he told The Daily Signal.

“The Obama administration stuffed the Pentagon with people who didn’t have the defense of the country in mind, but had social engineering on their mind. Every dollar we spend on social engineering is one dollar less we are spending on defense,” Boehm said.

Boehm said he doesn’t understand why the Trump administration hasn’t made a change, but is willing to give Mattis the benefit of the doubt.

“I would suspect it’s a little like drinking from a fire hydrant,” Boehm said of what may be on the defense secretary’s mind, adding:

There is already one problem after another. I’ve never viewed Mattis as squishy. Trump authorized him to handle troop levels in Afghanistan. If he has that authority, I’d think he would tighten other things up. But sometimes you have to make trades in the short term for the bigger picture.

At this early juncture, it likely is a matter of priorities for the Trump administration, said Steven Bucci, a retired Army Special Forces officer and former top Pentagon official who was military assistant to Defense Secretary Donald Rumsfeld when the U.S. went to war in Afghanistan and Iraq.

“Every day a policy is in place, it gets harder. Because of the ‘little c’ conservative nature of the Department of Defense, change is difficult,” Bucci, now a visiting fellow on national security policy at The Heritage Foundation, told The Daily Signal.

“Ash Carter’s legacy was women in combat and transgender issues,” Bucci said, referring to the last of Obama’s three defense secretaries, and a deputy to the previous two. “I don’t think we want Mattis to focus on the social issues as his No. 1 priority. We want him fighting bad guys. It’s unrealistic to think he would change the policies this early.”