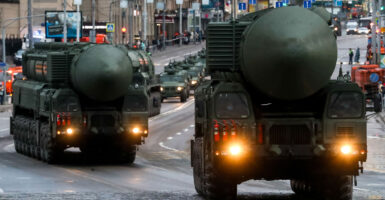 China is headed toward becoming a nuclear weapons peer of (or surpassing) the United States and Russia—a state of affairs for which U.S. nuclear forces are wholly unprepared. Pictured: Mobile launchers carrying Yars thermonuclear-armed ICBMs roll toward Moscow's Red Square on May 4 for a rehearsal for a military parade marking the 76th anniversary of the victory in World War II. (Photo: Sergei Fadeichev/Tass/Getty Images)

The Pentagon’s annual report on China’s military capabilities confirms that Beijing’s days of maintaining a minimum nuclear deterrent are over.

Along with several other concerning military developments, the report makes clear that China is headed toward becoming a nuclear peer (or surpassing) the United States and Russia—a state of affairs for which U.S. nuclear forces are wholly unprepared.

The size and scope of China’s nuclear arsenal have been subjects of public debate, with most information remaining classified.

Last year, the Pentagon reported that China’s nuclear arsenal of about 200 warheads would double by the end of the decade. Disarmament advocates used that statistic to claim that China’s arsenal will stay way below the United States’ deployed arsenal of about 1,550 strategic nuclear weapons, so the U.S. can afford to unilaterally reduce its arsenal (even though this argument still ignores Russia’s nuclear buildup).

Yet other estimates put China’s nuclear stockpile headed toward much more than a doubling, citing the rapid expansion of its nuclear capabilities. Adm. Charles Richard, commander of the U.S. Strategic Command, wrote earlier this year that China might “triple or quadruple” its stockpile by the end of the decade.

This year’s China military report confirms that Beijing might have 700 warheads by 2027 and at least 1,000 by end of decade. That would mean a fivefold increase—even greater than Richard’s prediction.

The Defense Department report states that China is building hundreds of new missile silos and “is on the cusp of a large silo-based [intercontinental ballistic missile] force expansion comparable to those undertaken by other major powers.”

Some analysts have suggested that many of China’s new missile silos would remain empty. But the Pentagon report seems to be confirming that China plans to fill those silos with missiles, swatting down the notion that Beijing would build silos, but not use them.

Rather than maintain the minimum level of nuclear forces needed to deter attack, it’s clear that Beijing’s nuclear ambitions fit into a greater goal of building a world-class military, one capable of using coercion to pursue its interests.

In light of this information, the U.S. has its work cut out for it to ensure that it can maintain deterrence of the advancing Chinese threat. The current U.S. nuclear force posture was designed back in 2010 for a completely different threat environment, one where China still had a very small nuclear arsenal and Russia was not considered an adversary.

In other words, the United States’ current nuclear forces are designed to deter only one peer nuclear threat (Russia), not two.

So, just as China threw its minimum deterrence posture out the window, the U.S. needs to toss out any proposals to unilaterally reduce its nuclear forces.

Nuclear deterrence requires maintaining the capabilities required to convince an adversary that a nuclear attack will not be worth the costs. It also requires convincing adversaries that the U.S. has the will to actually use its nuclear weapons.

To show China and the rest of the world that the U.S. is serious about deterring nuclear threats posed by our adversaries, the Biden administration needs to consider changes to our force posture to account for the doubling of peer nuclear competitors—something the U.S. has never faced before.

That might mean an increase in warheads, deployment of new capabilities, or other posture adjustments.

To convince both our adversaries and allies of U.S. resolve, the Biden administration should forgo rhetoric about reducing the role of U.S. nuclear weapons and pledging to never use nuclear weapons first in a conflict.

The Pentagon report details why China is the pacing threat with which the U.S. will need to contend for the foreseeable future. Time will tell whether the Biden administration will be up to the challenge.