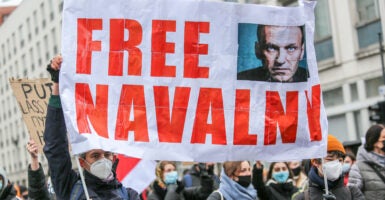 Supporters of Russian opposition politician Alexei Navalny marched in Berlin on Jan. 23, demanding his release from a Russian prison. Berlin is home to a large expatriate Russian community. Whether Navalny's status will come up Wednesday at the U.S.-Russia Strategic Stability Dialogue remains to be seen. (Photo: Omer Messinger/Getty Images)

The United States and Russia on Wednesday will hold the first round of a Strategic Stability Dialogue in Geneva. Talks of this type will be the first in about a year—and the first for the Biden administration.

The meeting will focus on reducing the risk of nuclear war and on arms control. How the United States approaches those talks will be an important indicator of the White House’s posture toward the Kremlin moving forward.

It’s critical that Team Biden gets it right.

Unfortunately, the talks come at an extraordinarily difficult time in U.S.-Russian relations. Some would even say that bilateral ties are at a post-Cold War low. For instance, Washington and Moscow remain at odds over Russia’s annexation of Crimea in 2014 and its support of the ongoing insurgency in the eastern part of Ukraine.

Of course, there’s also Russia’s continued occupation of Georgia and its support of the Bashar Assad regime in Syria during the conflict there. Don’t forget about Moscow’s meddling in Belarus.

You can add to that the Kremlin’s possible direct or indirect involvement in cyber operations against the United States, including ransomware attacks and the SolarWinds hack.

On arms control, Moscow has violated the Intermediate-Range Nuclear Forces Treaty and the Open Skies Treaty, and is in clear breach of the Chemical Weapons Convention.

The point is that relations are very rocky, but the Biden administration must, at minimum, still make the following difficult points:

Of course, considering the state of U.S.-Russia relations, we should keep our expectations for “progress” on those and other issues low. A thin gruel of a photo-op and a joint statement may be all we get.

But the opportunity for substantive dialogue is important. At this moment, more predictability, stability, and communications would be welcome in U.S.-Russian relations.