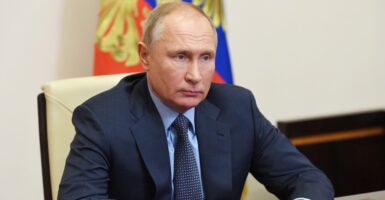 Russian President Vladimir Putin, seen here Jan. 19 near Moscow, is said to have held off negotiating the extension of the New START arms control treaty with the U.S. pending the outcome of the American presidential election. (Photo: Alexei Nikolsky/TASS/Getty Images)

News that President Joe Biden intends to seek a five-year extension of the New START agreement with Russia is disappointing, to say the least.

New START restricts the number of delivery systems and warheads that the United States and Russia can deploy. Signed in 2011, it’s set to expire on Feb. 5 unless the leaders of both countries agree to an extension for up to five years.

The Pentagon’s new spokesman argued that “Russia’s compliance with the treaty has served our national security interests well, and Americans are much safer with New START intact and extended. We cannot afford to lose New START’s intrusive inspection and notification tools.”

But that statement assumes that New START sets appropriate limits on both sides’ weapons, and that its verification system is strong enough to prove Russia is not cheating.

Neither assumption is sound.

First, New START doesn’t provide limitations on all of Russia’s nuclear forces. While the treaty limits about 90% of the U.S. nuclear arsenal, it only limits 45% of Russia’s. New START excludes Russia’s enormous stockpile of 2,000 lower-yield tactical nuclear weapons (whereas the United States only has 500).

Russia’s recent military doctrine has indicated a greater willingness to use nuclear weapons on the battlefield, making this unconstrained weapon class particularly dangerous.

Russia is also building new nuclear delivery systems outside New START limits, such as a nuclear-powered cruise missile and an unmanned, underwater torpedo.

A five-year extension of New START essentially gives Russia the “go ahead” to continue work on those dangerous systems.

New START doesn’t limit the number of warheads a single missile can carry, so Russia has fielded missiles that can hold up to 10 warheads each.

Technically, Russia has the capacity on its missiles to deploy more warheads than the 1,550 allowed under New START limits. But the mere 10 annual inspections the United States is allowed make it nearly impossible to determine whether Russia abides by that limit.

While the United States continues to maintain its nuclear forces within New START limits, Russia will now have a free pass to continue unfairly advancing its nuclear arsenal for five years, all while abiding by the treaty.

Another major issue with a five-year New START extension is that it ignores China’s dramatic nuclear buildup.

Beijing is nearing completion of its nuclear triad, working toward doubling the size of its nuclear stockpile, and is on track to become a strategic nuclear peer to the U.S. by 2030.

China is obligated by the Nuclear Non-Proliferation Treaty to work toward disarmament, but extending New START for five years without including China lets Beijing continue to advance its nuclear forces unconstrained.

Last fall, President Donald Trump’s administration came to the cusp of a new deal with Russia that would have begun to address some of the issues with New START. Both countries had agreed in principle to extend New START for one year in exchange for a freeze on both countries’ nuclear stockpiles.

However, once the U.S. presidential election drew near, Russian President Vladimir Putin delayed further talks in hope of obtaining a more favorable deal with a new administration, and—bingo!—that is just what he got.

Other than the arms control zealots, the person likely happiest with Biden’s Thursday announcement is Putin.

Biden could have employed the negotiating leverage the Trump administration gained to seek a short-term extension in return for that freeze on nuclear stockpiles. Instead, he gave it all up on his very first full day in office. As stated by the former envoy for arms control, Marshall Billingslea: “We are getting nothing for extending [the treaty].”

The Biden administration intends to use the five years to negotiate a new arms control agreement with Russia. But negotiating a limit to all nuclear weapons and creating a stronger verification regime than the one provided by New START might be more difficult now that the Russians have already gotten their way.

Moving forward, the imperative to support the bipartisan effort to modernize our aging nuclear forces becomes even more important. Delaying or canceling any nuclear modernization programs would be akin to unilaterally disarming as Russia and China, too, continue to build up their own forces.

Our adversaries’ nuclear forces pose an existential threat to the United States, and for that reason, nuclear deterrence continues to be our nation’s No. 1 national security priority.

While extending New START does not make America safer, Biden now has the opportunity to carry through nuclear modernization efforts initiated by his former boss, President Barack Obama, to ensure a strong nuclear deterrent for decades to come.