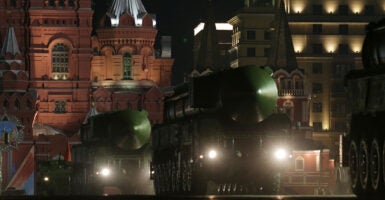 After Russia violated the Intermediate-Range Nuclear Forces Treaty by developing and deploying ballistic missiles in the prohibited range, the administration withdrew from the treaty. This was the right move. Pictured: Yars intercontinental ballistic missile carriers roll down Red Square in Moscow in advance of a military parade on May 5, 2016. (Photo: Artyom Geodakyan/TASS/Getty Images)

Since publication of the last Mandate for Leadership, the Trump administration has worked to maintain a safe, secure, and credible U.S. nuclear deterrent.

The administration’s 2018 Nuclear Posture Review puts deterrence of nuclear and non-nuclear attacks at the top of its list of priorities and accounts for negative security trends since the 2010 Nuclear Posture Review. This includes a resurgent Russia with an extensive nuclear weapons modernization program and the return of great-power competition with China.

The administration has supported programs to modernize nuclear delivery systems that were started under the Obama administration and has chosen to augment the U.S. nuclear force posture with supplemental “non-strategic nuclear capabilities.” Those capabilities include a low-yield warhead for the Trident II D5 submarine-launched ballistic missile in the near term and a low-yield sea-launched cruise missile in the long term.

These supplemental capabilities are designed to counter Russia’s perception that the only U.S. response to a low-yield nuclear weapon in the early stages of a conventional conflict would be high-yield nuclear weapons, and that the United States would therefore back down for fear of escalation.

Russia has as much as a 10-to-1 advantage over the United States in this class of weapons. Additionally, it is developing nuclear weapon capabilities to exploit what it perceives as a U.S. gap on the escalatory ladder, and its programs and exercises suggest that Russia is lowering its threshold for nuclear weapons use.

The administration has also supported sustainment and life extension programs for U.S. nuclear warheads, including requesting funding for the nuclear complex that is tasked with executing these important missions.

The Trump administration has also supported the Stockpile Responsiveness Program, which is aimed at exercising almost all of the skills required to develop and field a nuclear warhead.

The administration has reclaimed U.S. leadership on arms control that advances U.S. national security. The administration responded to Russia’s ongoing development and deployment of large numbers of ballistic missiles in the prohibited range in violation of the Intermediate-Range Nuclear Forces Treaty by giving Russia a notice of withdrawal from the treaty and suspending the treaty’s implementation.

Additionally, the Trump administration worked with U.S. allies in Europe to increase the costs of violations for Russia and to support U.S. withdrawal efforts. That is no small feat considering that agreements within NATO have to be unanimous and worked out through painstaking diplomacy.

The Trump administration has also been considering whether to extend the New Strategic Arms Reduction Treaty with the Russian Federation. The treaty is set to expire in 2021 and can be extended by up to five years.

Under the treaty, the United States has had to bear a majority of the reductions while Russia has been allowed to build up two of the three categories of weapons to which the treaty applies.

The treaty’s flawed verification regime makes it difficult to uncover and detect Russian cheating. In short, the treaty, once hailed as the “crown jewel” of the Obama administration’s “reset” policy with Russia, has failed to contribute to more constructive and less malign relations with Russia.

With regard to missile defense, at the beginning of its term, the Trump administration decided to bolster the U.S. Ground-Based Midcourse Defense program and increase the number of interceptors the United States has available in Alaska and California from 44 to 64.

That was an important step, because the Ground-Based Midcourse Defense system is the only system that the United States currently has to shoot down long-range ballistic missiles that do not have advanced countermeasures and decoys—the kinds that North Korea can potentially deploy.

In March 2019, the Missile Defense Agency conducted a groundbreaking and successful Ground-Based Midcourse Defense test against a target simulating an intercontinental-range ballistic missile.

The administration published its long-awaited congressionally mandated Missile Defense Review, a statement of policy intended to guide the administration’s missile defense programs as it prepares budget submissions for Congress, in 2019.

For example, the Missile Defense Review dropped the word “ballistic” from its name to account for the nature of contemporary missile threats that now include missiles not flying on ballistic trajectories, such as cruise missiles or hypersonic weapons that U.S. adversaries are increasingly exploiting.

On the downside, the Trump administration did not request any funding for a space-based sensor layer in its fiscal year 2020 budget, thus potentially delaying by a year what has been considered essential to making existing missile defense systems as effective as possible.

Despite President Donald Trump’s statement that “[o]ur goal is simple: to ensure that we can detect and destroy any missile launched against the United States—anywhere, anytime, anyplace,” the administration also did not request funding to develop space-based interceptors in its fiscal year 2020 budget request. Space-based interceptors, if deployed in sufficient quantities, could reasonably protect the nation from Chinese and Russian ballistic missiles.