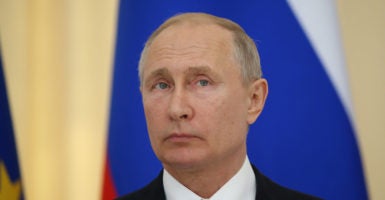 According to Lt. Gen. Robert Ashley, Russia “probably is not adhering to its nuclear-testing moratorium in a manner consistent with the zero-yield standard.” Pictured: Russian President Vladimir Putin at a press conference earlier this month. (Photo: Mikhail Svetlov/Getty Images)

That’s an indication that Russia doesn’t share the same understanding of the Comprehensive Test Ban Treaty that the U.S. does.

In the United States’ understanding, the treaty prohibits any nuclear weapons experiments that produce yield.

As a consequence, the United States ceased all yield-producing experiments and instead relies on computer simulations and experiments that don’t produce yield. Since 1992, the U.S. has not tested nuclear weapons.

The treaty itself does not define what constitutes a nuclear weapons test—one of its major flaws that led to the treaty’s rejection by the U.S. Senate in 1999.

According to Ashley, Russia “probably is not adhering to its nuclear-testing moratorium in a manner consistent with the zero-yield standard.”

Ashley’s remarks are the first U.S. government official’s suggestion that Russia’s nuclear warhead modernization activities are inconsistent with the U.S. understanding of the treaty.

Russia’s activities inconsistent with the U.S. understanding of the test-ban treaty have been discussed previously, including in the 2009 Strategic Posture Commission Report and in the 2012 National Research Council report on the treaty.

When the Comprehensive Test Ban Treaty was negotiated in the late 1990s, the directors of the U.S. nuclear laboratories asked to be able to conduct experiments below 1 kiloton to ensure U.S. nuclear weapons operate as expected. The Clinton administration prohibited them from doing so and the restriction remained in place.

Unlike Russia and China, the United States is not building new nuclear warheads. Instead, it conducts life-extension programs on existing warheads, the average age of which is almost 30 years.

That means that the majority of weapons scientists and engineers who actually have any experience of fielding new-design nuclear warheads are either dead or retired (or very close to it).

It was not until fiscal year 2016 that Congress established the Stockpile Responsiveness Program aimed at building up and exercising all capabilities to “conceptualize, study, design, develop, engineer, certify, produce, and deploy nuclear weapons.”

The Trump administration requested $34 million for the effort in fiscal 2019, the first time a substantive amount of money has been requested for the program.

The United States would have a lot to gain from conducting very-low-yield nuclear warhead experiments.

It also potentially could lead to a better understanding of what kind of warhead modernization activities adversaries and competitors can do using the latest technologies and low-yield experiments.

The United States must think long and hard about what Russian and Chinese nuclear warhead modernization activities mean for a long-term viability of current U.S. approaches to the maintenance of its nuclear stockpile.

By not conducting any nuclear experiments, the U.S. is potentially forgoing military advantages that it now appears the Russians aren’t.