Why Low-Yield Nuclear Warheads Are Critical to Preventing Nuclear War 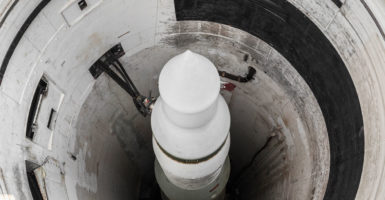 Bailey Oedewaldt is a member of the Young Leaders Program at The Heritage Foundation.

Last month, Rep. Ted Lieu, D-Calif., introduced a bill that if approved would stop the administration’s plans to modify select warheads on submarine-launched ballistic missiles to give them a low-yield option.

Such a step is unwise, considering the compelling rationale that drove the Pentagon to initiate the effort.

The bill argues that U.S. low-yield options would “increase a likelihood of a nuclear war.” But the truth is just the opposite.

As the 2018 Nuclear Posture Review states, the development of a low-yield nuclear warhead for a U.S. submarine-launched ballistic missile is the fastest way to prevent this miscalculation.

The sense of urgency is justified.

Credibility is at the heart of deterrence, and Russian actions indicate that the United States is losing credibility.

The Lieu bill argues, “a low-yield nuclear warhead would be indistinguishable to an adversary from the high-yield W76 and W88 submarine-launched warheads.” The U.S., however, has always assumed Russia would be able to distinguish between a limited nuclear launch and a large-scale nuclear exchange, even if the risk of a failure for such a distinction is not zero.

The United States has had low-yield nuclear weapons in its arsenal for decades, and their existence has not lowered the threshold for nuclear warfare.

Additionally, the United States currently must rely on aircraft to deliver low-yield weapons. Diversifying the delivery method is important for scenarios in which these specialized aircraft are unavailable or don’t have an ability to penetrate an adversary’s airspace.

Few would advocate relying on a single leg of the nuclear triad, owing to concerns over survivability. Similarly, few ought to support relying only on air delivery of low-yield nuclear warheads.

Converting a W76 warhead to provide for a low-yield option is not technologically challenging, nor is it particularly costly either.

British submarines reportedly carry low-yield nuclear warheads. Insofar as Moscow wouldn’t be able to distinguish a British launch from an American one, adding a low-yield option seemingly should not increase the risk of a miscalculation and could conceivably decrease it.

The complexity of nuclear threats has increased since the end of the Cold War, yet the United States has decreased the variety of nuclear warheads in its arsenal.

A strong and diverse nuclear arsenal deters other nations from using their nuclear weapons and provides security for both the United States and its allies that rely on U.S. nuclear guarantees for their own security.

Any policy precluding such a diversity for years to come is just plain wrongheaded.