A Universal Basic Income Is Anti-Work 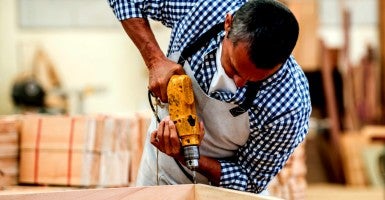 In 1964, 94 percent of men between 25 and 54 were working. Today, employment for this group has fallen to 83 percent. In other words, while population has nearly doubled, employment has increased by only 70 percent. (Photo: istockphoto)

In a recent article, Richard Reeves of the Brookings Institution suggests that we should decouple income from work through a “universal basic income” based on the premise that the labor market no longer equitably distributes the gains from economic growth to those at the bottom of the income distribution.

This is the wrong policy route for several reasons. First, a basic income is anti-work.

The primary problem in the labor market isn’t that economic growth hasn’t reached low-income workers, but that people aren’t working.

As James Sherk and I have written in National Interest, the primary problem in the labor market isn’t that economic growth hasn’t reached low-income workers, but that people aren’t working. A basic income would not eliminate poverty—understood as a household’s ability to sustain itself above subsistence without depending on government. Nor would it necessarily increase economic opportunity.

According to economists V. Joseph Holtz and John Karl Scholz, when the “negative income tax” was proposed in the 1960s, “President Johnson … opposed the [negative income tax] and a leading alternative proposal at the time, a guaranteed annual income, on the grounds that both proposals undermined work effort.” Furthermore, state experimentation with the negative income tax in the 1960s and 1970s shows that it tends to reduce work without a significant effect on household consumption.

The current welfare system provides very generous benefits to low-wage working parents. For example, a single mother working full-time or nearly full-time at the minimum wage has a combined income from earnings and welfare that is well above the poverty level. The main effect of a “universal basic income” policy would be to raise the government benefits of able-bodied adults who work very little or not at all. Compared to the present system, such a policy would significantly increase the rewards of non-work relative to work, accelerating the trend to disengagement from labor and increasing long-term dependence and welfare costs.

Why is it more important to focus on work rather than income alone?

In 1759, Voltaire expressed a fundamental truth in his “Candide, ou l’Optimisme” in that “work saves us from three great evils: boredom, vice, and need.” In the Malthusian world that existed before modernity, material living standards declined as population increased, and income was frozen at a subsistence level. Work and charity were the only ways to fulfill a household’s needs.

The industrial revolutions of the last three centuries ended this static relationship and in the process turned hunger and premature death into a cornucopia. As economist Deidre McCloskey has eloquently phrased it, “we’re no longer asking ‘how will we eat, but where will we do lunch?’”

Today, we are in the midst of the fourth industrial revolution, driven by computers and other smart machines, which are again increasing the “size of the economic pie” in a way that is replacing need with want, both in the U.S. and globally.

Work is no longer a necessary condition required to save one from need in the same way that Voltaire spoke about the relationship 257 years ago. How we deal with the way in which this fundamental change affects our culture and relationship with work has meaningful implications for our future.

Sure enough, as the relationship between work and need has broken down, there has been a real structural disengagement from work over the last 50 years. Groups of people that once participated in the economy through work are leaving the labor market.

This disengagement is, in part, correlated with segmentation in skills and a growth in the welfare system. Highly skilled workers in technical fields (those working with the smart machines) have continued to work, as they are able to collect higher returns for their labor than ever before. At the same time, those in service industries with high initial human capital costs—including medicine and law—have also been able to collect high returns.

Likewise, we’ve realized record opportunity in the service economy, which has spawned a variety of boutique industries increasing the quality and quantity of goods available for consumption.

However, those not equipped to participate in the new economy are disengaging at record numbers. And this trend started well before the 2007-2009 recession. In 1964, 94 percent of men between 25 and 54 were working. Today, employment for this group has fallen to 83 percent. In other words, while population has nearly doubled, employment has increased by only 70 percent. For some time, women were making up for the fall in employment of men. However, that trend has reversed, as labor force participation for women between 25 and 54 is at its lowest level in almost 25 years. This record disengagement has also had a meaningful effect on our culture, which has been weakened by the shrinking size of the population that participates in the economy. This is especially true in areas where labor participation is low and the norm is that men and women are not working.

If work provides benefits besides monetary gains (e.g., providing a greater connection to society), the substitution of leisure for labor likely decreases well-being more than economists estimate. This shift in cultural standards is already having deep effects in other areas, such as the ability to build lasting relationships, that increase opportunity and general fulfillment.

Given that the causes of the great disengagement seem to be structural and long-term rather than cyclical, it is unlikely that higher levels of economic growth will significantly increase employment. It is also unfair to say that technology is the reason for unemployment (technological unemployment is often predicted but never realized).

The policy challenge is not to find a more equitable way to distribute national income, but rather to support opportunity and a strong civil society through work.

This could be achieved by reducing the disincentive to work through reforms of the tax and welfare systems, removing onerous and costly federal regulations that prohibit job creation and innovation in human capital markets, and reducing the burden of government that we pass to each generation through continued deficit financing of consumption.