5 Myths About the Nuclear Posture Review 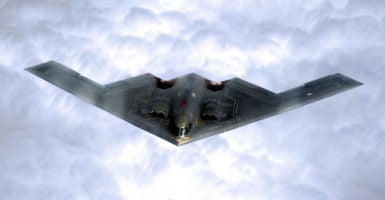 Denitsa Nikolova is a member of the Young Leaders Program at the Heritage Foundation.

In reality, the review is a balanced document carefully weighing the impact of dangerous international trends like a resurgent Russia and an aggressive China on U.S. nuclear posture.

The recommendations in the review, if implemented, will result in a safer world. Here are the top five myth-busters about the Nuclear Posture Review:

1. The Nuclear Posture Review does not bring us closer to war.

The Nuclear Posture Review takes into account downward trends in the post-Cold War international environment, particularly the frustration of efforts to help Russia become a responsible member of the international system.

Even the Obama administration recognized this trend after Russia’s 2014 invasion of Ukraine.

The Nuclear Posture Review makes the case for the continued importance of nuclear triad for deterring aggression and preserving peace. By evaluating the current threats to the United States and allies on a case-by-case basis, U.S. strategy communicates to ill-intentioned actors like North Korea or China that we are prepared to face them and ultimately makes the possibility of engagement less likely.

2. A world without nuclear weapons is not safer.

Until 1945, mankind lived in a nuclear free world. That world was much less pleasant than the relative peace and stability since the dawn of the nuclear age. U.S. nuclear capabilities, however, “cannot prevent all conflict, and should not be expected to do so,” as the Nuclear Posture Review states. They are designed to deter large-scale attacks on the United States or allies.

World War II alone claimed between 60 to 80 million lives in about five years. Today, nuclear weapons continue to fulfill their mission of deterring a large-scale attack on the U.S. and allies. They have never failed their mission and as such are one of the most successful weapons systems in U.S. history.

3. The Nuclear Posture Review does not mandate new nuclear weapons.

Both systems would use existing nuclear warheads and do not require a departure from the current nuclear stockpile sustainment approach. These low-yield weapons address the capabilities gap perceived by our adversaries. “To be clear, this is not intended to, nor does it enable, “nuclear war-fighting.” Expanding flexible U.S. nuclear options now, to include low-yield options, is important for the preservation of credible deterrence against regional aggression,” argues the Nuclear Posture Review.

Our rivals may believe that the U.S. would be self-deterred to respond in a conflict in which they would use low yield nuclear weapons first.

Such a misperception is dangerous and ultimately makes a use of an adversarial nuclear weapon more likely.

4. The Nuclear Posture Review does not lower the threshold for nuclear weapons use.

Creating options for the president to be able to appropriately address what adversaries say is an exploitable gap in U.S. capability is not lowering the threshold for nuclear weapons use, it’s good national security policy.

A decision to use nuclear weapons wouldn’t be made haphazardly and it would be open for inputs from the president’s national security team.

Similarly, the Nuclear Posture Review lists certain scenarios under which a retaliatory nuclear weapon use could be considered.

“The United States would only consider the employment of nuclear weapons in extreme circumstances to defend the vital interests of the United States, its allies, and partners,” argues the review.

Being more specific does not mean the threshold for nuclear usage is lowered. It communicates to adversaries that the U.S. is willing to contemplate the use of the most devastating weapons it has at its disposal in response to large-scale attacks, regardless of how those attacks are conducted.

5. The Nuclear Posture Review modernization program is affordable and consistent with a bipartisan consensus post-Cold War.

The Nuclear Posture Review continues bipartisan efforts to modernize our nuclear arsenal in a cost-effective way.

In words of Secretary of Defense James Mattis, “America can afford survival.”

U.S. nuclear weapons have made the world safer and more peaceful.

The nation and allies will require their stabilizing effects for decades to come. That is why the Trump administration must modernize the U.S. nuclear arsenal and warheads.

The Nuclear Posture Review is a step in the right direction wholly consistent with a bipartisan consensus on U.S. nuclear weapons policy post Russia’s 2014 invasion of Ukraine.