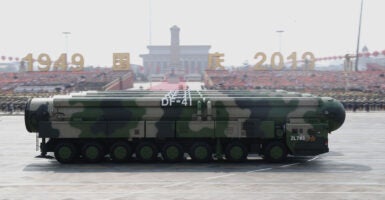 Instead of disarming its nuclear arsenal, China is expanding and modernizing its nuclear forces. Pictured: Dongfeng-41 intercontinental strategic nuclear missiles are reviewed in a military parade in Beijing Jan. 5, 2020. (Photo: Liu Bin/Xinhua/Getty Images)

China’s ambition to become the next great power is no secret.

The Chinese Communist Party already built the world’s largest navy, tested more ballistic missiles than the rest of the world combined, continues its hostile takeover of the South China Sea, and is pursuing economic colonialism.

But perhaps most alarming to U.S. national security is China’s rapid buildup and modernization of its nuclear forces.

As a party to the Nuclear Non-Proliferation Treaty, China should be working “in the direction of nuclear disarmament,” but instead continues to expand and modernize its nuclear forces.

Advancements include rounding out its nuclear triad with the H-20 and H-6N strategic bombers, fielding a nuclear-tipped hypersonic glide missile, and developing the JL-3 submarine-launched nuclear missile, whose range would nearly double that of its current JL-2 missiles.

U.S. defense officials state that China possesses just over 200 nuclear weapons, but many experts believe the number is 300 or more. Regardless, over the next decade, that number is projected to double.

But perhaps more concerning than this sheer number increase is its implication: Because China’s nuclear production facilities are actually operating (unlike in the United States where they have gone “cold”), it can easily grow its stockpile even further.

This buildup also suggests China’s deliberate shift away from its previously announced minimum deterrence posture, which entailed maintaining the smallest nuclear arsenal needed to deter a first strike. This recent surge in production suggests the doctrine has changed.

China’s nuclear “Great Wall of Secrecy” threatens to further destabilize the global security environment and risks miscalculation during a crisis.

Considering China’s stated goal of revising the international order and its expressed disdain toward other international regimes, like the United Nations Convention on the Law of the Sea, China’s disregard for the Nuclear Non-Proliferation Treaty should come as no surprise.

Former Chinese leader Deng Xiaoping’s concept to “hide our capabilities and bide our time” clearly appears to be a thing of the distant past. President Xi Jinping instead dreams to usher in the “great rejuvenation of the Chinese nation.”

But if China wants to be a great power, then it must act like one.

Cooperating on nuclear issues is never an easy task, but can produce payoffs in the form of agreements that can increase transparency of nuclear forces, like the New START agreement between the United States and Russia.

New START (for all its flaws) provides an opportunity for the United States and Russia to develop an improved plan to cover their own nuclear forces that can also enable China to join an agreement later on.

In fact, President Donald Trump has made it clear that any agreed upon arms control framework between the United States and Russia should include a means for China to join in the future. This is a worthy goal, and our allies agree.

Poland, Norway, the Netherlands, Iceland, Sweden, Slovakia, Slovenia, Denmark, and NATO are among a growing list of international partners who have voiced their support for including China in a trilateral treaty in the future.

Unsurprisingly, when recently invited by the United States to Vienna to negotiate alongside the U.S. and Russia on a New START extension, no Chinese representatives showed up.

China’s ambition to grow its arsenal, secrecy behind its nuclear weapons program, and ambiguity over its intentions on how and when to use nuclear weapons are deeply disturbing. These concerns make the transparency that a trilateral deal can foster all the more invaluable.

For this reason, the United States and its allies must persist in efforts to pressure China to negotiate, and recognize that we might be in this effort for the long haul.

The next administration, whosever it may be, must continue to focus on bringing China into a future agreement.

President Ronald Reagan’s statement, “Everybody would be a loser if there’s a nuclear war” seems obvious, but without tearing down Xi’s Great Wall of Secrecy around China’s nuclear arsenal, that nightmare scenario may be all the more likely.