US Nuke Chief Stresses Need for Modernization Amid Rising Threats 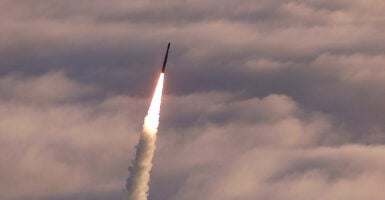 Elizabeth May is a master’s student at The George Washington University and a member of the Young Leaders Program at The Heritage Foundation.

In testimony before the House and Senate Armed Services committees on Tuesday and Wednesday, Adm. Charles Richard, head of U.S. Strategic Command, revealed more intelligence on the “unprecedented expansion” of China’s nuclear arsenal, warning that China can no longer be considered a lesser threat compared with Russia.

In his testimony, the admiral identified apparent shifts in Chinese nuclear doctrine as a primary concern.

China currently possesses a relatively small nuclear arsenal constrained by its declared “no first use” policy. However, Beijing is undertaking a major effort to bolster both its strategic and regional nuclear forces.

Richard forcefully conveyed that China is developing advanced silo-based, road- and rail-mobile intercontinental ballistic missiles, nuclear-powered ballistic missile submarines, and a new bomber to complete a viable strategic nuclear triad. Beijing is also on the path to double—if not to triple or to quadruple—its nuclear stockpile within the decade.

These surges signal a marked deviation from China’s long-standing minimal deterrent posture. Instead, Richard warned, China “can do any plausible nuclear employment strategy regionally” with its forces now and eventually at intercontinental ranges.

Richard also emphasized China’s apparent transition of a portion of its forces to a launch-on-warning posture, meaning that some forces will go on “high-alert duty” to enhance readiness. Synced with improvements to China’s space-based early warning system, those assets are poised to retaliate to any perceived threat.

Richard found this shift unsettling, “considering the immature nature of Chinese strategic forces and compressed timelines needed to assess and frame a response, increasing the potential for error and miscalculation.”

The disparity between the American and Chinese warhead production capacity was yet another worrisome trend discussed on Capitol Hill.

Some question the significance of China’s stockpile increases, since even a quadrupling of its stockpile will still leave China with fewer warheads than the United States. But Richard clarified that “you don’t deter by accounting,” as China’s ability to produce nuclear material can “change the upper bounds of what China could choose to do” in terms of expanding its arsenal.

Responding to a question from Sen. Deb Fischer, R-Neb., Richard described the situation: “Both China and Russia have significant capability in their nuclear weapons complexes. … We have no capability right now to actually make a new weapon.”

In light of these threats, Richard’s request for modernized nuclear forces, particularly the Ground Based Strategic Deterrent (the replacement for the 400 Minuteman III intercontinental ballistic missiles), is well-founded.

The Ground Based Strategic Deterrent program makes up the land leg of the U.S. nuclear triad, which has been on guard for 50 years. Despite their age, some propose keeping these missiles in the ground longer, instead of replacing them.

The land leg provides a critical contribution to U.S. deterrence. The 400 missiles deployed across three states in the United States present a targeting challenge so severe that attacking the United States would be extremely undesirable, as doing so would deplete adversary forces and invite a massive U.S. response.

Without these missiles, adversaries would only need a handful of nuclear weapons to target the remaining bomber bases, submarine ports, and command-and-control nodes to destroy U.S. nuclear forces in a first strike.

However, U.S. intercontinental ballistic missiles are so old that some parts are becoming obsolete. In fact, Richard reminded us that our missiles were built before the invention of the internet, which presents a great challenge for ensuring this system is secure from cyberattacks.

Such logic makes it difficult to understand why some members of Congress still advocate extending the use of these Minuteman III missiles. Why try to get by with pre-internet-era technology when you can have a missile built in the 21st century?

As Richard stated, “You cannot indefinitely life-extend anything, and I cannot deter with the leftovers of the Cold War forever into the future.”

If the U.S. is to deter Russia and China at the same time—and deter them differently—it must have weapons that can reach their targets with certainty.

The Strategic Command chief is right. Nothing lasts forever. If the United States does not recapitalize its legacy nuclear forces, our ability to deter could be placed in jeopardy.