Nuclear Modernization Is Our Top Defense Priority, and America Can Afford It 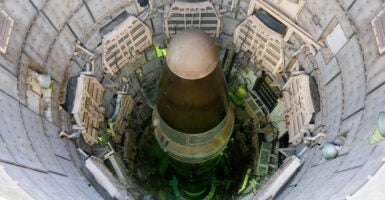 After years of deferring nuclear modernization, the United States is now forced to take on multiple modernization efforts all at once. This may be costly, but cannot be avoided. Pictured: A Titan ICBM rests in a missile silo. (Photo: Michael Dunning/Getty Images)

At a recent Heritage Foundation event, Sen. Deb Fischer, R-Neb., brought some needed simplicity to the debate over the affordability of nuclear modernization.

After years of deferring nuclear modernization, the United States is now forced to take on multiple modernization projects all at once. This includes modernizing the three legs of the nuclear triad—land-, air-, and sea-based systems—as well as all nuclear warheads in the U.S. stockpile and their supporting infrastructure.

The U.S. will simultaneously be sustaining its current nuclear forces, which were built during the Cold War, until their replacements are ready.

Unsurprisingly, this effort is not expected to be cheap. The Ground Based Strategic Deterrent program, the replacement for our Minuteman III intercontinental ballistic missile fleet, alone could cost around $95 billion.

The Congressional Budget Office put the 10-year cost of both nuclear modernization and sustainment of current forces at almost $500 billion.

Naturally, critics pounce on these costs to make their case for why the United States should unilaterally disarm.

If that were not enough, ever since the national elections, the Department of Defense has been bracing itself for the increasing likelihood of a flat budget for fiscal year 2022. So how can the Defense Department afford expensive nuclear modernization programs under a constrained budget?

Fischer, the top Republican on the Senate Armed Services Subcommittee on Strategic Forces, made the answer seem obvious. She pointed out that the five most recently confirmed secretaries of defense, including current secretary, Gen. Lloyd Austin, have affirmed nuclear deterrence as the Defense Department’s No. 1 mission for national security.

As she told the audience on Monday, “That means when you’re putting together a budget, it’s the first thing … that goes in.”

She rebuked arguments that suggest funding for nuclear weapons should be cut in order to fund other capabilities like cyber or artificial intelligence, explaining, “That’s exactly the opposite of what it means to prioritize. If you prioritize something, that’s the first thing you fund.”

A safe, secure, and reliable nuclear force is so critical because the threat of nuclear retaliation can deter great power war, as it has done for the past 75 years. Even in the early stages of the Manhattan Project, the atomic bomb was referred to as “the bomb to end all wars” by lab director J. Robert Oppenheimer.

Today, the combination of the land-, air-, and sea-based nuclear weapons that compose the nuclear triad continues to keep the American people safe by deterring adversary attack.

So of course the department can afford to fund modernization programs for this No. 1 priority. As former Secretary of Defense James Mattis has stated, “America can afford survival.”

However, this argument is not to say that nuclear modernization should be exempt from efforts to minimize costs. Fortunately, this has not been the case.

For instance, a 2014 analysis estimated that maintaining the current Minuteman III missiles would actually be more expensive than building a new missile through the Ground Based Strategic Deterrent program. It is puzzling, then, that those who decry the costs of nuclear modernization also propose extending the Minuteman III missile.

Those who support cutting funding for nuclear modernization programs argue for saving costs in the near-term, but deferring costs does not avoid them.

As Fischer referenced, the 2012 decision to delay the Columbia-class submarine resulted in lower costs in that five-year window. But, the Navy estimated this actually increased the total program costs by billions of dollars. Plus, now the program no longer has room for delay in its development schedule.

To both avoid long-term costs and further delay in schedule, Congress must discard the failed strategy of paring back nuclear modernization programs at the lowest levels of funding possible before their schedules become in jeopardy.

Last year, for example, Congress cut funding for the Long-Range Standoff Weapon, the replacement program for the nuclear air-launched cruise missile, after the Air Force awarded its contract early and moved ahead of schedule. With this cut, Congress missed an opportunity to reduce risk in the program and lowered the chances the program can deliver on time.

Congress should instead seek to advance nuclear modernization programs as quickly as possible to avoid deferred long-term costs as well as delays. As Fischer pointed out, “[m]odernization already is just-in-time—if not late-to-need—and so we don’t have the luxury of pausing or delaying these important programs.”

The Biden administration and Congress may need to make many difficult spending choices in this year’s budget-constrained environment. As the Defense Department’s first priority, nuclear modernization should not be one of them.