US Needs to Be Prepared for Increasing Nuclear Threats to Homeland 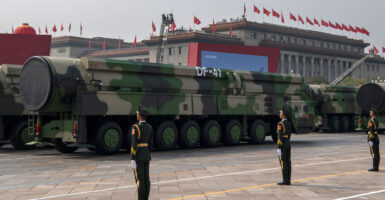 China, once hoped to rise peacefully, has also been rapidly advancing its ability to reach the U.S. homeland with a nuclear weapon. Pictured: The Chinese military parades its DF-41 intercontinental ballistic missiles, which can reportedly reach the United States. (Photo: Kevin Frayer/Getty Images)

Elizabeth May is a master’s student at The George Washington University and a member of the Young Leaders Program at The Heritage Foundation.

In a hearing before the Senate Armed Services Committee, Gen. Glen VanHerck, the commander of U.S. Northern Command, brought some necessary attention to the growing nuclear threats to the U.S. homeland.

Russia was at the top of his concerns. To match a more assertive nuclear doctrine, Russia is undertaking a massive nuclear modernization effort. This includes a first-of-its kind heavy intercontinental ballistic missile that can carry a hypersonic glide vehicle that is able to evade U.S. early warning systems.

VanHerck also highlighted Russia’s entirely new capabilities under development, including a nuclear torpedo and a nuclear-powered cruise missile, which could have unlimited range.

China, once hoped to rise peacefully, has also been rapidly advancing its ability to reach the U.S. homeland with a nuclear weapon. It has deployed several road-mobile ICBMs and ballistic missile submarines, and, according to VanHerck, will eventually deploy advanced hypersonic weapons.

Adm. Charles Richard, commander of U.S. Strategic Command, has already warned us that China is on track to become a nuclear peer to the U.S. by the end of the decade.

And, of course, we can’t forget about North Korea and Iran.

Despite longstanding doubts about the rogue nation’s abilities, North Korea has made significant strides with its ballistic missile arsenal. Since 2017, North Korea developed three ICBMs that could target the U.S. homeland and recently paraded a new ICBM that could be even more powerful.

North Korea also has an active nuclear weapons program. It’s worth contrasting this with the state of the U.S.’ nuclear infrastructure, which—after being allowed to atrophy for years—is incapable of building a nuclear weapon.

And then there’s Iran, which continues to invest in missile and space technologies. Iran is steadily increasing its potential to eventually assemble an ICBM that could hold the continental United States at risk.

To address these threats, VanHerck homed in on missile defense, which provides the capability to deter an adversary by denying its ability to harm the U.S. That means that if an adversary sees the U.S. has a capability to stop a successful attack by shooting down a missile, an adversary will be less emboldened to press the launch button.

The first step to a strong missile defense is a good network of sensors and radars able to see the incoming threat. When discussing the growing cruise missile threat posed by Russia and China, VanHerck remarked, “We don’t want to be in a situation … where endgame defeat is our only option.”

He’s right on the money with this. Defeating advanced missiles must start with improving sensors. After all, seeing the threat is a prerequisite to being able to shoot it down.

One improvement the U.S. is making in this area is the development of the Long Range Discrimination Radar program in Alaska, which will improve the ability to track incoming missiles headed toward the homeland. Last year, Congress also provided funding for a radar to be built in Hawaii to further expand radar coverage.

And of course, the U.S. needs to be able to intercept incoming missiles. Currently, the U.S. deploys 44 ground-based interceptors capable of defending against a limited ballistic missile attack.

Fielded in 2004, these interceptors are currently undergoing repairs and upgrades to ensure they will last through the end of the decade, but will ultimately need to be replaced by the upcoming Next Generation Interceptor program.

The next generation interceptors will bolster the size, reliability, and capability of today’s interceptors, and are absolutely crucial to being able to defend against increasing threats from North Korea and Iran.

After over a year of delay in the contract award for the Next Generation Interceptor, it currently awaits approval on the desk of Deputy Secretary of Defense Kathleen Hicks.

In a response to a question from Sen. Deb Fischer, R-Neb., VanHerck was clear about the importance of moving forward with the Next Generation Interceptor: “It gives us extra capacity to go against threats that … could exceed our current [ground-based interceptor] inventory and … will give us capability because the threat continues to advance their capabilities.”

The deputy secretary’s decision to approve the Next Generation Interceptor program will surely be an easy one.

VanHerck’s testimony gives a useful reminder that missile defense must be a top priority. Threats to the U.S. homeland are clearly becoming increasingly challenging, and in turn, so is the task of fulfilling the United States’ moral obligation to protect its citizens from attack.

To realize this reality, the onus is on the Biden administration and Congress to ensure this critical priority receives the attention and funding that it deserves.