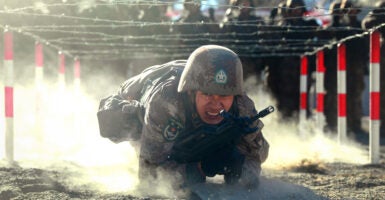 Trying to preserve a veneer of democratic legitimacy, the Chinese government goes through the political theater of a meeting of its rubber-stamp Congress every March.

This month, the Chinese announced that their 2021 defense budget is going to be $1.35 trillion yuan, an increase of 6.8% over the 2020 budget. That’s on top of a budget that grew by 6.6% and 7.5% in the past two years and has experienced consistent recent growth.

It reflects the extraordinary importance the Chinese Communist Party has put on modernizing and growing the capacity, capability, and readiness of the People’s Liberation Army. In the past decade, Beijing’s reported defense budget has more than doubled, from about 600 billion yuan in 2011 to 1.35 trillion yuan in 2021.

It’s worth noting that these are just the reported numbers, reflective of what the Chinese Communist Party wants the world to believe about its defense budget, not a full nor transparent picture.

As Heritage Foundation research has shown, there are major challenges with getting a complete picture of the Chinese defense budget and converting it to dollars.

Just one challenge analysts face in making budget comparisons is that the Chinese Communist Party routinely omits some important categories of expenditures from its defense budget that are considered fundamental parts of the defense budget of most other nations—mainly, its research and development spending.

It also does not include the People’s Armed Police, a force estimated at between 400,000 and 800,000 and directly under the Central Military Commission since 2018.

Additionally, there is the inherent challenge of understanding the Chinese defense budget in the context of world expenditures; that is, converting yuan to dollars.

The uninformed will be tempted to simply convert the number into dollars using a market exchange rate and thus arrive at a result close to $200 billion.

Market exchange rates can be useful to understand the relative cost of goods travelling across country lines, but exchange rates are poor tools to compare purchases locally done in the local currency without much pressure from a global market, as is the case for most goods and services bought with a country’s defense budget.

For that, the purchasing-power parity index—an index that measures how far your dollar can go in a country—provides a more precise picture.

Just moving the conversion method from the market exchange rate to the purchasing-power parity index, an internationally established metric, changes the Chinese reported defense budget by 50% to $321 billion, opposed to the widely reported $208 billion.

More importantly than the method of conversion that brings more clarity to the debate is the information that we can glean from the announced defense budget.

The message being sent to the world by the communists is clear: The People’s Liberation Army is going to continue its expansion.

Meanwhile, there’s much speculation that the United States’ next defense budget (2022) will be held flat at the 2021 level, resulting in a loss of about $15 billion in purchasing power due to inflation. It’s a curious reaction from a political leadership that professes to make countering China’s expansion a priority.

The Chinese have been playing catch-up, trying to match our military capabilities, and their recent announced budget is a good reminder of their progress and plans.

We should not make it easier for them. We should continue to invest properly in our national defense.