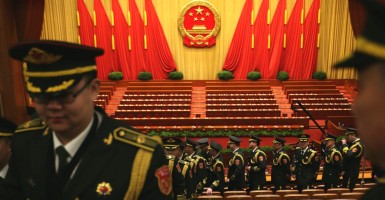 Members of the Chinese military band leave the hall after the opening of the fourth Session of the 12th National People's Congress (NPC) at the Great Hall of the People in Beijing, China on March 5th. (Photo: How Hwee Young/EPA/Newscom)

As the Chinese National People’s Congress met in Beijing this week, one announcement was the planned defense budget for 2016. Contrary to some rumors, China’s defense budget will rise by “only” 7.6 percent in 2016, only the second time in 20 years that the growth has been in single digits. At 954 billion renminbi, or approximately $147 billion, China’s defense budget is second only to that of the United States.

The Chinese defense budget figure has long been a source of controversy, as it is believed to understate actual Chinese defense spending. Part of this is likely due to different accounting methods, as well as a tendency to limit transparency.

Nonetheless, it is clear that China is going to continue to allocate substantial resources to its defense modernization efforts, even as the larger Chinese economy begins to show signs of slowing.

The Chinese defense budget announcement comes on the heels of announcements of three major reform pathways.

In December, the Chinese announced the establishment of three new services: a separate ground forces command; the elevation of the Second Artillery to the status of a service; and the creation of a separate service to control China’s space, electronic warfare, and computer network attack forces. Subsequently, the Central Military Commission was reorganized from four General Departments to 15 departments, commissions, and offices.

It is not clear why the Chinese defense budget increase was scaled back, although some analysts think it may reflect China’s slowing economy. It is worth noting, however, that the increase in the People’s Liberation Army budget is still substantially higher than the growth of any Western military.