No, NASA Shouldn’t Get in Bed With China’s Space Program 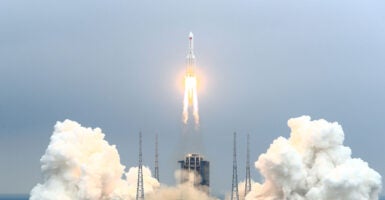 The International Space Station is getting a new neighbor. The People’s Republic of China launched the Tianhe (Heavenly Harmony) module of its new space station on April 28.

This module will serve as the core habitation area of the space station, which will be joined by several other modules for experiments and scientific activities. The entire station is expected to be completed by 2023.

This project is part of a broader effort by China to expand its space capabilities, which includes placing additional satellite constellations around Earth and further exploiting “cislunar” space, the volume of space between Earth and the moon.

Some see the Chinese space station as an opportunity to once again call for U.S.-PRC space cooperation. In particular, there has long been a segment of NASA and the broader American space community that would dearly love to see more open cooperation with China in space.

Much has been made of the Apollo-Soyuz mission, which some consider some kind of turning point in U.S.-Soviet relations, and there is the hope that a similar reset might be possible if there were a joint U.S.-Chinese space mission, perhaps involving the International Space Station and the new Chinese station.

Absent from this discussion has been the Wolf Amendment, which prohibits NASA from spending any money on bilateral cooperation with China. Despite this, it is the fond hope of this contingent at NASA and the arms control community that the United States will choose to pursue more extensive space cooperation with China, a position that the new NASA administrator, Bill Nelson, seemed to reject during his confirmation hearings.

It also ignores the reality that China is flouting the basic rules of space safety. This was highlighted in the Tianhe launch. The Long March 5B rocket that carried the module into space did not shed its heavy rocket motors during the ascent. Instead, the entire core entered orbit—it is now expected to reenter sometime in the coming weeks. Where the 23-ton rocket will come down is unknown because it will be an uncontrolled reentry.

An earlier Long March 5B launch in May 2020 saw pieces crash into the Ivory Coast—with no real warning from Beijing.

This pattern extends to the earlier Chinese Tiangong-1 space lab. When its mission ended in 2016, Chinese authorities assured the world that they had retained full control of the 9.3-ton vessel. Several months later, concerns began to arise, which Chinese officials vehemently dismissed. Only after months of additional inquiry did Chinese authorities admit that, in fact, they had no control over the space lab.

Tiangong-1 eventually reentered the atmosphere in 2018, splashing down over the South Pacific.

China has been launching rockets long enough to both understand global best practices and norms, as well as the responsibility of letting others know when and where its debris may land. Its refusal to be more transparent in its space activities (even to such basic concepts as its overall space budget) should serve as a cautionary restraint on the wild expectations for space cooperation.