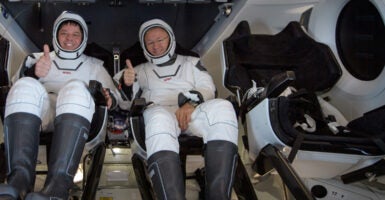 The Trump administration makes it clear that corporations will be able to develop lunar and other celestial resources within a legal framework. Pictured: In this image from NASA, astronauts Robert Behnken, left, and Douglas Hurley are seated inside the SpaceX Crew Dragon capsule that landed Aug. 2 in the Gulf of Mexico off Pensacola, Florida, after completing a mission to the International Space Station. (Photo: Bill Ingalls/NASA/Getty Images)

As a new generation of entrepreneurs has rekindled interest in outer space the issue of private property has moved from the margins to center stage.

In 1967, more than 100 nations signed onto the Outer Space Treaty, introduced to help govern the nascent Space Age. Created 10 years after the Soviet Union’s  launch of the satellite Sputnik, the treaty reflected broad international agreement on several principles.

The most well known and commonly cited principle is that no weapons of mass destruction should be placed in outer space. An additional consideration is that nations should not be able to make claims of sovereignty on astronomical bodies such as other planets or the moon.

What was unclear in the language of the 1967 treaty was the issue of property rights. Although no nation could lay claim to Mars, or the moon, or a portion of either, what about the ability to mine resources?

This was a largely moot point for much of the Space Age. The United States landed six crewed missions on the moon, but all of these were for scientific and exploratory purposes. No resources ever have been recovered from any other celestial bodies such as asteroids, meteors, or other planets.

In part, the reason was the cost of space launches; the expense of placing objects into orbit or sending them to other planets was prohibitive in starting an industrial base in space.

Moreover, humanity’s focus on space generally has been on scientific, military, and political aspects. Some have raised economic concerns about how to use space to do terrestrial things better, such as communications or farming or travel (involving satellites for communications, weather, and navigation, respectively).

Fully 53 years after the Outer Space Treaty, however, this has begun to change. The success of SpaceX, Blue Origin, Virgin Galactic, and other private companies has led to what has been termed Space 2.0.

The Obama administration’s decision to rely on commercial space-launch services to resupply the International Space Station opened the door to expanding private enterprise’s role in space.

The innovation exhibited in the various Falcon launches, including the ability to reuse the booster rockets, has seen a significant drop in the cost of placing payloads into orbit. As a result, a real opportunity exists for companies to begin thinking about how to use space not simply to improve terrestrial operations, but to make money from space and its physical resources.

The uncertainty associated with private property rights, however, has had a constraining effect on the ability to exploit space more extensively. Companies are unlikely to be willing to risk capital and assets if they are not sure that they will be able to profit from their investments.

For this reason, NASA Director James Bridenstine’s Sept. 10 announcement of a formal solicitation for lunar soil and ore (known as regolith) is enormously important.

In one stroke, the U.S. government has made it clear that corporations will be able to develop lunar and other celestial resources within a legal framework. As important, NASA’s solicitation is open to international companies; this means that the United States recognizes a global right for companies to extract and exploit space resources.