How the US Government Should Respond to the Protests in Belarus 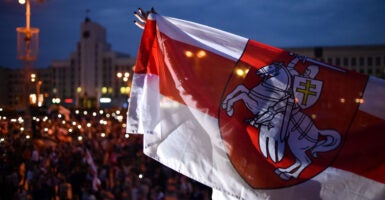 Belarus is in the midst of a national struggle that will determine its future geopolitical orientation: the Euro-Atlantic community or Moscow.

On Aug. 9, Belarus held its presidential election. In the lead-up, the nation witnessed a vast change in its political climate.

Support for Tsikhanouskaya grew exponentially since mid-July, when she announced her candidacy. Tens of thousands attended her pre-election rallies.

Unsurprisingly, due to Belarus’ track record of rigged votes, the Lukashenka government claimed that the incumbent won a landslide victory with approximately 80% of the vote. Afterward, there were many accusations of electoral rigging.

When the polls closed the evening of Aug. 9, Belarusians poured into the streets of Minsk to protest the supposed election result. Daily mass protests across Belarus, albeit peaceful ones, have occurred since then.

In retaliation, riot police and members of the armed forces have violently cracked down on the protesters. At least two protesters have been killed, many have been injured, and at the time of this writing, more than 6,000 have been arrested. On Aug. 14, Belarus’ Interior Ministry revealed that it released more than 2,000 protesters who had been detained, but the majority remain in custody.

Immediately after the election, Tsikhanouskaya fled to Lithuania after facing pressure to evacuate from Belarusian authorities. On Aug. 17, she declared that she was ready to take over as Belarus’ national leader.

Both Tsikhanouskaya and the general Belarusian population have demanded that Lukashenka resign. Lukashenka, however, is fighting to remain in power. He has ruled out a repeat vote and rejected foreign offers of mediation. On Aug. 17, Lukashenka visited a tractor factory in attempt to rally support, but the workers responded with boos and heckling.

Over the past year, the Trump administration has increasingly engaged diplomatically with Belarus, breaking with years of U.S. foreign policy. In August 2019, then-national security adviser John Bolton visited Minsk. His visit was significant because it was the first by a senior U.S. official in more than 18 years.

In February 2020, Secretary of State Mike Pompeo also visited the Belarusian capital, marking a significant U.S. shift toward Belarus, since it was the second visit by a senior U.S. official in just six months.

Unlike the United States’ positive diplomatic engagement with Belarus, Russia’s engagement is negative.

Since the dissolution of the Soviet Union in 1991, Belarus and Russia have remained close. In 1999, the two countries signed a document constituting their joining as a union-state, complete with a single currency, flag, and economy instituted in writing. Belarus and Russia still have not fully integrated their union-state, but the treaty remains. Stemming from this treaty, Lukashenka and Russian President Vladimir Putin share close relations and communicate often.

On Aug. 15, Lukashenka reportedly told Putin that the ongoing protests pose a threat not only to Belarus, but also to Russia. The following day, the Kremlin revealed that Russia is prepared to assist Belarus militarily.

With the protests in Belarus continuing to grow each day, it is likely that Russia could intervene.

Ultimately, it is up to the people of Belarus to decide how and by whom they are governed. Their protesting is quickly becoming their revolution.

As the situation develops, the U.S. should do several things.

First, it should continue the nomination process for an ambassador to Belarus. U.S. diplomatic presence in Belarus is crucial for normalizing bilateral relations again, despite the current political unrest there, especially as the new political landscape is developing.

In addition, the U.S. should reject the notion of a union-state between Belarus and Russia by issuing a Welles-like declaration if Russia moves to annex Belarus.

It would also be beneficial for the U.S. to lead NATO in planning for increasing defenses, in case of a fully integrated union between Belarus and Russia.

Currently, Belarus borders three NATO members—Latvia, Lithuania, and Poland. If Belarus and Russia were to fully integrate, the military situation in northeastern Europe would be fundamentally changed. As a defensive alliance, NATO would need to bolster its capabilities in the region. Planning for this should start now.

The U.S. should also work closely with Europe, especially with Latvia, Lithuania, and Poland, regarding the events in Belarus. These three nations know Belarus best and have already taken on an informal leadership role.

Lastly, the United States should assess the impact of potential Belarusian refugees in Latvia, Lithuania, Poland, and Ukraine. If Russia does end up intervening militarily in Belarus and fighting breaks out, many Belarusians could become internally displaced persons or externally displaced (i.e., refugees).

And if fighting were to escalate, Latvia, Lithuania, Poland, and Ukraine could face an influx of these Belarusian refugees. The U.S. should discuss with these nations the potential impact this could have on their infrastructures and security.

The situation in Belarus is changing by the day. If the protests continue, Russia could intervene militarily. This could have consequences for the region that would affect NATO, the U.S., and its allies and partners.

While the future direction of Belarus will rest in large part on the shoulders of Belarusians themselves, it is in America’s interest that Europe remain stable and free of Russian meddling and aggression.