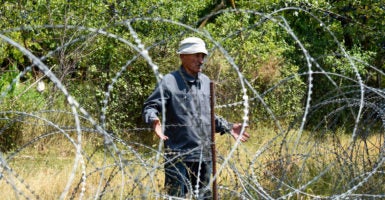 A picture taken on July 25, 2018, shows Dato Vanishvili standing behind a wire barricade erected by Russian and Ossetian troops along Georgia's de-facto border with its breakaway region of South Ossetia in the village of Khurvaleti. "It's like living in a prison, here," he said. (Photo: Vano Shlamov/AFP/Getty Images)

On May 27, Georgian Independence Day, the U.S. Embassy in Tbilisi issued a statement condemning Russia’s continued borderization activities along the line of occupation in Georgia. The U.S. was right in making this statement.

Since 2011, three years after the Russo-Georgian War, Russian-led security forces have continued to illegally claim Georgian territory through a process known as “borderization.” This process includes erecting fences and barriers to separate Georgian communities and further divide the population.

Borderization remains a very present reality for Georgians. Last month, Russian-led forces built unauthorized fences and reinforced existing illegal structures near 12 separate Georgian villages. This is one instance among dozens that have occurred over the past nine years.

Last October, The Heritage Foundation and the McCain Institute created an interactive map illustrating Russia’s borderization efforts occurring since 2011. Since the map was created, more instances of borderization have occurred.

In April, for example, Russian occupation forces erected or moved fences in Takhtisdziri, a village in Georgia’s Kareli Municipality.

In the May 27 statement, the U.S. Embassy called for Russia to end its occupation of 20% of Georgia’s territory, fulfill its commitments outlined in the six-point peace plan from 2008, withdraw its forces from Georgian soil, and halt blocking the delivery of international humanitarian assistance.

But more importantly, the embassy indicated that the U.S. “will not waver” in its continued support for Georgia’s sovereignty and territorial integrity.

Georgia is a committed friend and partner of the United States. Over the years, Georgia has deployed thousands of troops in support of U.S. missions in both Iraq and Afghanistan. Georgia also has suffered the most per capita loss in Afghanistan than any other country.

It’s extremely important that the U.S. remain committed to Georgia in return.

In January, the U.S. reinstated an ambassador in Tbilisi after a two-year hiatus. Since Ambassador Kelly Degnan’s arrival in Tbilisi, the U.S. Embassy, along with other U.S. government entities, have been persistent in calling Russia out, and not only regarding borderization.

And in late May, the U.S. Embassy and State Department condemned Russia’s ongoing borderization in Georgia.

These are all extremely positive signs that the U.S.-Georgian alliance is stronger than ever. They rightly demonstrate that our countries’ relationship is worth preserving. Russia will likely continue its borderization efforts and illegal actions in Georgia. In response, the U.S. should continue to call Russia out. The United States’ partnership with Georgia is too valuable to not do so.