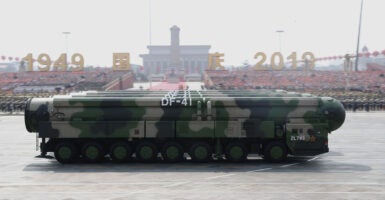 Just when you think you’re starting to get over the latest shocking news involving the People’s Republic of China’s unprecedented military buildup, you get zapped with another hair-raising jolt of reporting.

Now, China is believed to be building another new ICBM site, this time in Inner Mongolia, based on images taken by European Space Agency satellites between May and August, according to the U.S. Air Force’s China Aerospace Studies Institute.

This newly discovered ICBM field is expected to add a minimum of 30 to 36 new silos to the People’s Liberation Army Rocket Force’s land-based missile arsenal—on top of some 200 new missile silos unveiled by other analysts earlier this summer.

In total, we could be looking at 250-plus new Chinese ICBM silos.

These new ICBM silos—though not yet operational—could be added to the 20 existing ICBM silos and 100 road-mobile ICBM launchers that China’s Rocket Force already deploys at missile bases in the country.

Unfortunately, that’s not the end of it.

According to the China Aerospace Studies Institute, if China adds these 250-plus new ICBM silos to the Rocket Force’s existing operational ICBM arsenal, it would mean:

It’s no surprise then that last week, Adm. Charles Richard, commander of U.S. Strategic Command, warned during his speech at the Space and Missile Defense Symposium:

We are witnessing a strategic breakout by China. The explosive growth and modernization of its nuclear and conventional forces can only be what I describe as breathtaking. And frankly, that word ‘breathtaking’ may not be enough.

The admiral went on to say:

What matters is they are building the capability to execute any plausible nuclear employment strategy—the last brick in the wall of a military capable of coercion.

Considering China’s increasingly assertive foreign policy, these new nuclear capabilities will give Beijing greater freedom of action internationally to try to influence and control not only Washington, but also its Asian allies and partners.

It will also limit the spectrum of response options for the United States, its allies, and its partners to China’s ongoing bad behavior and belligerence.

Indeed, these changes will potentially allow China to constrain responses or compel outcomes surrounding Taiwan’s future, peace on the Korean Peninsula, and freedom of navigation in the South China Sea—among other ongoing challenges.

It’s no wonder that Richard predicted in his August speech that for U.S. interests in peace and stability in the Pacific—and, frankly, beyond—that in responding to Beijing’s bomb buildup, “Business as usual will not work.”

Really hard to quibble with that, considering all we’ve learned this summer about China’s missile forces.