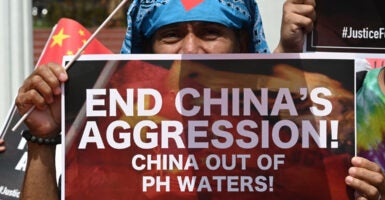 China's aggression in the South China Sea may seem like a distant problem, but the U.S. has much at stake economically. Pictured: Activists protest China's actions at a park in Manila on June 18, 2019, after a Chinese vessel collided with a Philippine fishing boat, sinking it in the disputed South China Sea and sailing away. (Photo: Ted Aljibe/AFP/Getty Images)

Alex Jund, a senior studying political science and French at the University of Michigan, is a member of the Young Leaders Program at The Heritage Foundation.

Tensions between China and the Philippines are rising in the South China Sea. How this conflict plays out will have long-lasting effects on the power struggle between China and other nations in the region, and larger implications for the U.S. as well.

A total of 220 Chinese militia and fishing boats on March 20 swarmed Whitsun Reef, a coral region in the South China Sea claimed by both China and the Philippines.

In response to China’s illegally operating its vessels in Philippine waters, the Philippines increased its law enforcement and military presence in the area.

According to the Center for Strategic and International Studies, 13 Philippine military vessels made 57 visits to contested areas from March 1 to May 25. In the previous 10 months, only three Philippine vessels visited these areas a few times.

Although the Philippines have intercepted and driven away its ships, China will not stop its intimidation campaign in the region.

Even though communist Chinese aggression in the South China Sea may seem like a distant problem, the U.S. has a lot at stake economically. Left unchallenged, China’s excessive claims could negatively influence global trade.

China wants to increase its dominance in the South China Sea because it is a major trade conduit where one-third of the world’s shipping occurs. The sea is also rich in seafood and oil reserves.

Because China claims that it owns the majority of the South China Sea, it has infringed upon other Asian countries’ maritime territory. These countries, including the Philippines, have their own exclusive economic zones. They don’t welcome China’s aggressive fishing and patrol vessels, and international courts have ruled against China’s claims.

To overcome the arguments of its opposition, China has relied on gray-zone tactics, which enable countries to achieve security objectives without resorting to violence. These tactics have allowed China to advance its goals peacefully in the South China Sea.

Since 2013, China has been building artificial islands that have turned into military bases in the Spratly and Paracel islands. This bolstered China’s dominance in the South China Sea area compared with other countries. China is gaining the upper hand without firing a shot.

To counter China’s growing power in the region, the U.S. should continue to support freedom of navigation, which allows ships to move and operate in accord with legal norms, an essential part of global trade and commerce. The U.S. Navy and Air Force conduct freedom of navigation operations that challenge foreign countries’ excessive maritime claims and establish what is appropriate behavior under international law.

Most recently, in February the U.S. carried out a freedom of navigation operation in the South China Sea. Maintaining an American presence there through occasional missions will help decrease China’s presence in the region.

China’s behavior toward the Philippines indicates that it wants to dominate the region through gray-zone tactics. Although the U.S. cannot singlehandedly resolve the complicated dispute in the South China Sea, maintaining that presence will help keep the region open and free, and that will benefit America.