It’s Time for Climate Realism When It Comes to China 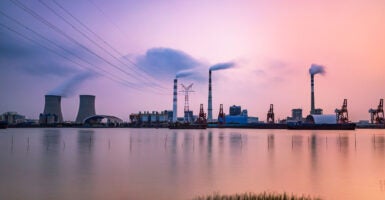 With per capita energy consumption far below the Organization for Economic Cooperation and Development average, China likely will continue to grow as it looks both to its domestic energy needs and to international energy markets. Pictured: A view of a coal-fired power plant in Shanghai. (Photo: owngarden/Getty Images)

The Biden administration has made much of its new commitment to the Paris climate agreement, marrying it with trillions in climate spending and regulatory proposals in the American Jobs Plan and courting complimentary legislation from Congress.

Under the agreement, the U.S. is committing to reduce national greenhouse gas emissions by at least 50% (from 2005 levels) by 2030, in a bid to keep global temperatures from raising 2 degrees Celsius relative to pre-industrial temperatures.

Meanwhile, China is in the background popping all the party balloons.

China’s energy market ambitions and environmental practices impact, for better or worse, its neighbors, trading partners, and global commons. Here are some trends in China that Americans ought to know:

In a matter of several decades, China has become a major global energy consumer and producer. With per capita energy consumption far below the Organization for Economic Cooperation and Development average, China likely will continue to grow as it looks both to its domestic energy needs and to international energy markets.

America needs to take these trends seriously, whatever the Biden administration’s aspirations may otherwise be.

China has committed formally to achieving maximum carbon dioxide emissions “around 2030” and to being carbon dioxide-neutral by 2060 as part of the Paris climate agreement. (China is also party to other international climate agreements with major economic implications, such as the Kyoto Protocol and Montreal Protocol.) Its most recent five-year plan and underlying implementing legislation appear to maintain China’s status quo of robust economic and energy growth.

China’s energy trends have implications for what it means to keep China accountable to its promises. But they should also inject some necessary realism into international climate agreements and U.S. policy responses to China. As Walter Lohman notes, “It’s hard to put any faith in Beijing’s pledges … Given the way these things played out, in fact, [Chinese President Xi Jinping is] probably eager to reap the benefits of more pledges.”

The Biden administration is very unlikely to reconsider its commitments under the Paris climate agreement. But there are policies that should be on the table.

As detailed by Columbia University scholars, Philippe Benoit and Kevin Jianjun Tu, China is outgrowing its label as a developing nation, even as it continues to enjoy the favorable terms and flexibility afforded to developing nations under international climate and finance bodies like the World Bank and U.N. Framework Convention on Climate Change. Perhaps it’s time that changed.

And, while the Biden administration has not seen fit to put the Paris Agreement before the Senate for advice and consent, Congress should avoid climate policies that impoverish Americans and halt legitimate energy infrastructure from being built in the U.S. If it doesn’t, Congress shouldn’t be surprised if China doesn’t follow along with an exorbitantly expensive approach.

No matter how policymakers interpret the climate data and future projections, U.S. policy responses should not be made in an isolationist vacuum.