The Real Story on China Climate Change Deal: We Make Changes Now, They Wait Until 2030 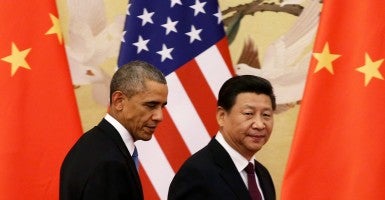 President Obama has announced what he calls “an historic agreement” in a climate change deal with China. In his commitment to reduce carbon emissions 26 percent to 28 percent below 2005 levels, the president is committing Americans to higher energy prices, a weaker economy and a lost competitive advantage.

China’s commitment to reduce greenhouse gas emissions is akin to a pledge from a broke, addicted gambler to his bookie to pay later.  China is telling the United States to make the economic sacrifices and restrict its energy use now, and China will start reducing its emissions beginning in 2030.  A few thoughts on why this is a raw deal for both countries:

As China commits to carbon emission reductions far into the future, the Obama administration is unilaterally imposing regulations that will drive up energy bills for American families and businesses today.

Along with the federal government’s war on coal, Obama is planning to use more executive orders to regulate aspects of the economy and limit individual choice under the pretense of addressing climate change. It’s far past time for our elected officials to stand up and prevent the federal government from implementing these economy-squeezing regulations.