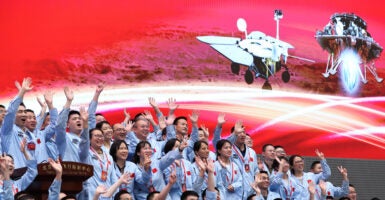 The People’s Republic of China last week became one of only three countries to successfully land a spacecraft on Mars.

The Zhurong rover appears to be an updated version of the Yutu (Jade Rabbit) rover that the Chinese have deployed on the surface of the moon.

At about 529 pounds, it’s smaller than the American Curiosity (1,982 pounds) and Perseverance (2,260 pounds) rovers. Nonetheless, it’s substantially heavier than Sojourner, the first American Martian rover (which was only about 23 pounds), sustaining the Chinese pattern of making sure that their “firsts” are larger, heavier, or of longer duration than others’ firsts.

Once the Zhurong debarks from its carrier, it will spend about 90 days exploring its surroundings in the area of Utopia Planitia. That region has been of interest to astronomers because of the possibility of ice beneath the immediate surface.

Water is a key resource for any crewed exploration effort. Being able to exploit local water would reduce the need to bring water from Earth, and would also provide any exploration effort with an essential component for manufacturing fuel for the return voyage, or growing food (or even reconstituting freeze-dried meals).

A similar interest is thought to have motivated the Chinese to land the Chang’e-4 probe on the lunar south pole—to look for possible ice deposits.

This choice of Martian landing area underscores the reality that China has a serious space program, one that is arguably the closest competitor to NASA’s.

The Tianwen-1 mission also highlights that China’s space technology is increasingly competitive with that of the United States. China is building its own space station, and fields a range of satellite constellations that provide earth observation, navigation and timing signals, and weather reporting.

With the Zhurong rover, Beijing has achieved something that until now has been a wholly American preserve—beaming pictures of Mars back to Earth. (Notably, the only other nation to land a probe on Mars, Russia, could only manage a single partial image before its Mars-3 probe failed, back in 1971.)

Indeed, given reports that the Zhurong will collect rocks for a Martian sample-retrieval mission, it’s likely that Beijing is hoping to be the first nation to bring Martian rocks back to Earth.

That’s in part because the Chinese see space as not only an area for technological competition, but political competition, as well. Beijing has long made clear that its space program generates a variety of non-space-related benefits. It reinforces the legitimacy of the Chinese Communist Party, justifying its rule. It brings political as well as technological prestige, reminding other nations of what China can achieve. It has military implications, as space technology is very much a dual-use set of technologies.

In that regard, the Chinese success also is another signal of Beijing’s likely challenge to the rules-based international order, especially in space. Even as the Tianwen-1 was preparing for the deployment of the Zhurong lander, China was also deploying the first module of its new space station.

The rocket that launched the module was a Long March-5, the same as for the Tianwen-1. In at least two instances (including for the space station module launch), the Chinese sent the rockets into orbit along with the payload and had no control over the rocket’s reentry.

That’s contrary to the best practices for rocket launches and for responsible state behavior. Only luck has kept reentering Chinese rocket engines and bodies weighing a dozen tons or more from inflicting casualties or causing significant damage.

As China launches more heavy payloads and interplanetary missions, it will be using more rockets. It remains to be seen whether the Chinese are going to conform more with international standards, or whether they will imitate 1960s satirist Tom Lehrer’s parody song “Wernher von Braun,” named for the renowned rocket scientist of the era.

Once the rockets are up, who cares where they come down?
‘That’s not my department,’ says Wernher von Braun.

Have an opinion about this article? To sound off, please email [email protected]al.com and we’ll consider publishing your edited remarks in our regular “We Hear You” feature. Remember to include the URL or headline of the article plus your name and town and/or state.