On Space Exploration Day, US Continues to Lead in Space 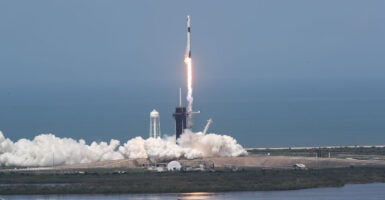 On Space Exploration Day, Americans can take pride knowing that the country is once again pursuing lofty goals in the exploration of space. Pictured: The SpaceX Falcon 9 rocket, carrying the Crew Dragon spacecraft, launches May 30 from Kennedy Space Center. This was the first manned space flight from the United States since the end of NASA's space shuttle program in 2011. (Photo: Joe Raedle/Getty Images)

July 20 marks Space Exploration Day, conveniently just 10 days before NASA is scheduled to launch its Mars 2020 Perseverance rover to the surface of Mars in what should be a historic mission.

When the Perseverance rover lands after its seven-month journey on an Atlas V rocket, it will search for clues of ancient life and collect rock and soil samples for an eventual return to Earth.

While many will only first hear about the Mars 2020 launch in the news over the next 10 days, space fanatics like myself have been anticipating July 2020 for years, and some for almost a decade.

The concept of collecting rocks on Mars and returning them to Earth for study dates back to the 2011 Planetary Science Decadal Survey, which listed the top scientific priorities that NASA ought to pursue over the next 10 years. The Mars sample campaign was No. 1.

July 2020 is also a big deal because it starts an open launch window—that is, a period of time when Earth is at an optimal position for a flight to Mars using the least amount of power.

The previous two Mars lander missions missed their launch windows and had to wait for the next one available—26 months later. Originally scheduled to launch July 17, the Mars 2020 mission already has been delayed three times, and will have only until Aug. 15 to launch before its window closes.

If the sample return mission succeeds, it will be a huge win for scientists itching to learn more about signs of ancient life on Mars. It could lead to a discovery with major implications for not just science, but theology and philosophy as well.

A successful mission also will contribute to the more substantial goal of sending humans to Mars.

In addition to learning more about the Martian surface and environment through the sample study, Perseverance will carry instruments to assess resources for human exploration—including a tool designed to demonstrate a possible way to produce oxygen from the Martian atmosphere for propellant or even breathing.

But for an eventual human landing on Mars, this administration has made it clear that the next required step will be sending humans back to the moon by 2024, as part of NASA’s Artemis program.

The last time we went to the moon, we did not go to stay. The Apollo moon landing missions were short-lived, lasting only from 1969 to 1972 as part of an effort initiated to beat the Soviets. The U.S. won this key Cold War battle, but afterward allowed its human spaceflight capabilities to atrophy.

After the Apollo program, the United States continued sending humans to space via the space shuttle program. But since the shuttle’s last flight in 2011, the U.S. has had zero ability to send humans to space up until a few months ago, when Americans flew to space from U.S. soil for the first time on a SpaceX spacecraft.

Up until this historic flight, the United States has had to rely on Russia for rides to the International Space Station, and watched as China sent a lander to the mysterious dark side of the moon—a move that has sparked concern over potential future military applications.

Under the leadership of the Trump administration, the United States plans to return humans to the moon and build out an infrastructure that will serve as a stepping stone to make it all the way to Mars, and maybe even beyond.

Amid the controversial and expensive issues that the United States grapples with today, it is easy to question the necessity of U.S. space exploration missions. But as in 1969, the United States must remain a leader in exploring the next frontier.

This is especially true in an era of great power competition with Russia and China. The Trump administration is right to take advantage of the unique opportunity to work with allies, partners, and commercial industry to not just get to the moon and back, but this time to stay.

And it’s hard to imagine a better way for the United States to exercise its world leadership, technological ingenuity, and robust commercial industry than to work toward quenching the innate human thirst for knowledge and understanding of the final frontier.