On Nukes, China Aims for Parity With US—or Maybe More 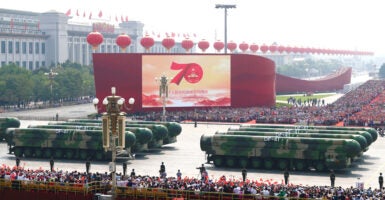 After a summer of extraordinarily bad news on the exponential growth of China’s strategic nuclear forces, recent public statements by U.S. government officials indicate Beijing isn’t only building out its nuclear forces, but also diversifying it, by considering new, nontraditional weapons, as well as possibly reconsidering its nuclear deterrent doctrine.

That’s an awful lot of troubling news in a few short months—on top of the already tense relationship between Beijing and Washington over a whole raft of other issues.

While public details are currently few on this matter, two senior U.S. officials recently noted that China is looking at developing novel nuclear weapons, possibly similar in scope to the efforts of Russia.

China seems to be following in Russia’s fissile footsteps.

In July, the U.S. permanent representative to the Conference on Disarmament in Geneva, Ambassador Robert Wood, said this of China’s People’s Liberation Army: “They’re pursuing weapons similar to some of the nuclear-powered delivery systems that the Russians have been pursuing.”

If true, Wood is likely referring to Russia’s new nuclear-powered, nuclear-armed torpedo, the Poseidon, and the new nuclear-powered cruise missile, the Burevestnik, both being developed to overcome current U.S. missile defenses at intercontinental ranges.

Referring to the propriety of developing a nuclear-powered missile, a Trump administration official once vividly described the Burevestnik as a “flying Chernobyl,” due to the likely radioactive effluent it would release into the atmosphere en route to its target, potentially harming those it flies over.

[China’s] nuclear buildup, which has accelerated in the last year, now looks to include novel nuclear-powered capabilities and a massive increase of its silo-based ICBM forces.

It turns out that it’s not just about novel nuclear weapons and the large growth in land-based ICBM silos that should be of concern.

In September, Air Force Secretary Frank Kendall said at a conference that he thinks that China, with its robust nuclear expansion, is moving Beijing toward a “de facto first-strike capability.”

To followers of this issue, that should come as no surprise.

Civilian researchers revealed this summer that Beijing is building nearly 300 new ICBM silos. If those land-based silos are outfitted with the most modern Chinese ICBM, which are capable of carrying five to 10 nukes per missile warhead, China could match—if not exceed—the United States’ and Russia’s land-based, operational nuclear arsenal.

Think of it as a plan for nuclear parity-plus.

Beijing could also be moving beyond its long-standing “minimum deterrence” nuclear doctrine. That doctrine and its previous relatively small nuclear arsenal allowed Beijing to retaliate against a foe if attacked with nukes with a second strike of its surviving strategic forces, but not to be able to conduct a debilitating first strike against an opponent (e.g., the U.S. or Russia) due to the limited size of its nuclear force.

Theoretically, the growth of China’s nuclear arsenal could give it a first-strike capability, encouraging it to cast aside its “no first use” policy, and potentially embracing a massive (preventive or preemptive) nuclear strike option against an adversary with the purpose of preventing a conventional military or nuclear response.

While much still needs to be known about Chinese strategic capabilities and possible nuclear doctrine changes, with novel nuclear platforms possibly in the pipeline and more strategic weapons likely in its arsenal, China appears to have every intention of standing toe-to-toe on nukes with not only Russia, but the United States, too.