Getting Nuclear Posture Review Right Is Critical for US Defense 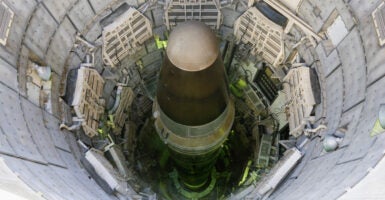 The Pentagon has recently begun its Nuclear Posture Review, an exhaustive assessment of the U.S. nuclear arsenal that is expected to take six months. Pictured: A decommissioned Titan nuclear intercontinental ballistic missile in a silo in Arizona. (Photo: Michael Dunning/Getty Images)

The Pentagon has finally kicked off its Nuclear Posture Review, a comprehensive assessment of U.S. nuclear capabilities and strategy, which will be conducted over several months. But already, President Joe Biden faces pressure—both from within the administration and from some in Congress—to reduce the role of nuclear weapons in our national security strategy.

What these members called “bold” suggestions would more aptly be described as “irresponsible.”

The Nuclear Posture Review provides the Pentagon the chance to align the U.S.’ nuclear forces against the current threat environment, and explore how current U.S. policy and military capabilities can impact strategic stability. The review provides a chance for senior officials to elicit input from allies and partners and produce an objective, threat-driven strategy.

A good nuclear posture should be based on the reality of the global environment—not on any idealistic, predetermined ideas that reflect the world the way we would like to see it.

In their letter, the progressive members mentioned former President Barack Obama’s 2013 nuclear employment guidance that suggested the United States could reduce its nuclear weapons arsenal by up to one-third. What the members missed was that Obama faced a radically different global security environment.

At the time, the 2010 Nuclear Posture Review had deemed Russia to no longer be an adversary, Russia had not yet invaded Ukraine, and China was not on its way to becoming a nuclear peer to the U.S. and Russia. Indeed, the global security environment has deteriorated even since the last Nuclear Posture Review was conducted in 2018.

In addition to nearing completion of its nuclear modernization efforts, Russia has been growing its stockpile of nonstrategic nuclear weapons, unconstrained by any arms control treaty, and developing entirely new weapons, like nuclear-tipped hypersonic missiles.

Meanwhile, the U.S. still relies on nuclear weapons built during the early Cold War years. The Minuteman III intercontinental missile, for instance, was built in the 1960s. Development of its replacement has only just begun.

We face a different China from what we knew in 2013. China has signaled a growing nuclear ambition by building more than 100 new missile silos, in two different locations each, in its western desert.

Adm. Charles Richard, commander of U.S. Strategic Command, has called China’s nuclear buildup a “breathtaking expansion,” and has noted that its nuclear stockpile will double—if not triple or quadruple—over the next decade.

The 2018 Nuclear Posture Review recognized this deteriorating global security. In addition to supporting the nuclear modernization efforts initiated by the Obama administration, it included two supplemental capabilities that would address the growing Russian and Chinese threats: a low-yield nuclear warhead and a sea-launched cruise missile.

Reasonable proposals to reduce the U.S. nuclear deterrent would in theory reflect a more permissive strategic environment. If the threat eases up, then we might justify reducing our arsenal. But that’s far from the case today. The trajectories of Russia’s and China’s actions and rhetoric tell us that a more benign environment in the near term is but a fantasy. If anything, the threat will probably only get worse.

So long as this threat exists, the United States must maintain strong nuclear deterrence. Failing to replace our Cold War-era nuclear systems would only undermine U.S. credible deterrence and signal a lack of resolve to defend national interests.

America needs a Nuclear Posture Review that is conducted free of external pressure and bias to produce a strategy that can sufficiently address the current and projected threats. Biden should resist preconceived ideas about what our nuclear posture should look like and instead let the process run its course.

If completed objectively, the Nuclear Posture Review process will likely arrive at conclusions similar to those reached in the 2018 report. That would at least include affirming the need to replace our outdated nuclear forces. It would certainly not lead to the recommendations proposed by the progressive working group; if anything, the worsening threat environment would dictate adding capability to our force posture.

Nuclear weapons are the foundation for a strong national defense. Getting our force posture right is of the utmost importance.