A Big Achievement for US Deterrence Posture Against Russia 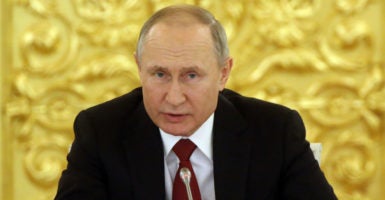 Now that the low-yield Trident warhead has been deployed, Russia knows any plan to use low-yield warheads in conflict is unacceptable and would be met with a proportionate American response. Pictured: Russian President Vladimir Putin speaks at the meeting of State Council Presidium and Presidential Council on Science Feb. 6, 2020, in Moscow. (Photo: Mikhail Svetlov/Getty Images)

On Tuesday, the Pentagon announced the U.S. Navy has deployed the W76-2 low-yield nuclear weapon on its Trident II submarine-launched ballistic missiles, an achievement that fills a critical gap in the United States’ deterrence posture against Russia.

The official announcement marks the completion of a short-yet-controversial process of modifying the Navy’s W76-1 nuclear warhead to lower its yield to just a few kilotons for deployment on sub-launched ballistic missiles, as called for in the Trump administration’s 2018 Nuclear Posture Review.

Opponents tried to block the low-yield option. The House Armed Services Committee added a provision to its version of the National Defense Authorization Act for fiscal year 2020 that prohibited funding for W76-2 deployment.

Opponents, such as Rep. Adam Smith, D-Wash., chairman of the committee, maintain the low-yield warhead lowers the threshold for nuclear war and increases instability. The opposite is true.

As evidenced by its nuclear doctrine, military exercises, and modernization of its tactical nuclear weapons, Russia contends it can threaten NATO with these weapons. Because the United States will not want to respond with a high-yield strategic weapon, it will back down, the theory goes.

Opponents argue that a low-yield or tactical nuclear weapon does not exist; that any use of a nuclear weapon would result in a strategic response. But what if Russia deploys a 5-kiloton weapon—about a third the yield used against Hiroshima—in Europe? Would the United States respond with a 100-kiloton weapon to save a NATO ally?

Deterrence involves what the Russians believe to be credible, not Democrats in Congress. And now, the United States can show Russia that it has a proportionate response option to its destabilizing nuclear strategy.

Moreover, the U.S. has had low-yield warheads in its arsenal for decades. The W76-2 simply augments this capability.

Bombers and tactical aircraft can carry low-yield warheads now, but it could be tough to deliver them if they are faced with advanced Russian air defenses. As Russia continues to ramp up its aggressive behavior, the United States should not rely only on the limited air leg of the nuclear triad for a critical deterrent capability.

Opponents also argue the low-yield Trident warhead is redundant because of the existing bomber capability. But if this were true, how could it also make war more likely? Rather, adding a low-yield option to the most survivable leg of the triad increases the diversity and flexibility of U.S. response options, without changing the high threshold for nuclear use.

Now that the low-yield Trident warhead has been deployed, Russia knows any plan to use low-yield warheads in conflict is unacceptable and would be met with a proportionate American response.

The Pentagon announcement should end debate on the W76-2 in this year’s congressional defense bills. At this point, any further attempts to undo the deployment of the W76-2 not only would result in a costly undertaking, but also would be extremely disruptive to the nation’s nuclear deterrent mission.