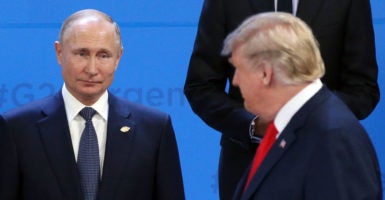 The United States is withdrawing this week from the Intermediate-Range Nuclear Forces Treaty, a 31-year-old agreement with Russia. The decision to withdraw is the right move.

Russia has failed to comply with the treaty in recent years, allowing it an advantage over the United States, which has continued to abide by the treaty. At this point, the treaty is only limiting U.S. capabilities.

On Feb. 2 of this year, President Donald Trump announced the United States would withdraw from the treaty in six months unless Russia verifiably destroyed its nontreaty-compliant missile system. It has failed to do so by the deadline of Friday, Aug. 2.

This comes after the U.S. has spent five years trying to persuade Russia to come back into treaty compliance. The U.S. has known since at least 2014 that Russia had developed and subsequently deployed at least three battalions of the Novator 9M729, a ground-launched cruise missile.

The treaty, signed in 1987 by President Ronald Reagan and Soviet leader Mikhail Gorbachev, prohibits such missiles with ranges between 500 and 5,500 kilometers.

NATO has completely supported the U.S. position, releasing a statement saying, “Unless Russia honors its INF Treaty obligations through the verifiable destruction of all of its ground-launched 9M729 cruise missile systems, thereby returning to full and verifiable compliance before the U.S. withdrawal takes effect in six months, Russia will bear sole responsibility for the end of the treaty.”

Russia has long denied these accusations, and instead accuses the United States of trying to start a new arms race.

In that regard, Thomas Spoehr, director of The Heritage Foundation’s Center for National Defense, has said, “Continued efforts by the U.S. government over the last five years to engage Russia to persuade them to return to compliance with the INF treaty have failed. All U.S. inquiries and efforts have been met with lies, deceit, and denial.”

The United States should no longer remain in a treaty that has been willfully and repeatedly broken by the other side. It binds the U.S. to existing conditions while our adversaries continue to make strides in their missile programs.

In order for arms control agreements to have value, all sides must observe their terms. Russian violations have placed the U.S. in a position of distinct military disadvantage.

America needs to treat this with urgency. It is time to leave the treaty.

Russia is using its treaty-violating missiles to intimidate European nations. To prevent this, the United States and its European allies must maintain the proper capabilities for deterrence.

Congress ought to support the Pentagon’s development of ground-launched versions of existing air and sea-launched cruise missiles.

Let’s hope the final version of the bill remedies that unfortunate policy.

Another shortcoming of the 31-year-old treaty is that it is outdated. It was forged at a time when there were only two world superpowers: the United States and the Soviet Union.

Today, things are different. China now has the second-largest military budget in the world and thousands of missiles that would be banned under the treaty if China was a participant.

The current treaty is simply outmoded and does not reflect the needs of the times.

The president is correct in leaving this treaty. Some will complain that U.S. withdrawal will lead to a new arms race, but these critics fail to realize that Russia has been conducting a unilateral arms race for at least five years now.

Russia’s violations of the treaty are designed to propel itself forward while leaving America in the starting gate. The U.S. exit from the treaty is unfortunate, but altogether necessary.