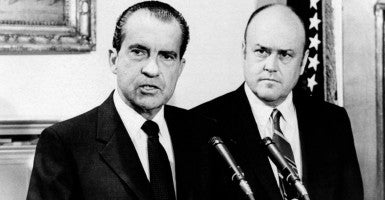 As Congress and the Obama administration clash over the Department of Defense’s budget, few Americans will probably think of the former Secretary of Defense Melvin Laird.

This would be a mistake, as many of the current budget battles within the Pentagon have parallels that can be drawn to Laird’s tenure as secretary of defense.

From 1969-1973, Laird fought the Nixon administration to preserve the department’s integrity and capabilities at great political risk to himself.

Today, we owe much of our security and modern military capabilities to Laird’s tenure during some of the most difficult years within the Department of Defense.

Laird’s efforts to mitigate the adverse effects of the war on the Department of Defense often led to positions that challenged both President Nixon and Secretary of State Henry Kissinger.

While the Nixon administration and the public were mired in debate over Vietnam, Laird maintained a strategic outlook that proved invaluably successful.

With Vietnam threatening to sap America’s resources and willpower to continue the Cold War—an issue that weighed heavily on Laird as he sought to speedily end America’s role in the conflict—he never hesitated to reasonably escalate the use of force against the North Vietnamese.

When the Vietnam War came to an end, America’s military faced serious problems. The Soviet Union, despite an era of economic stagnation had sustained its military modernization programs and amassed large numbers of nuclear weapons.

Weapons modernization reemerged as a central pillar of U.S. national security, but the military’s budget was throttled by the services’ staggering 3.5 million personnel.

In one of the most significant defense policies of the 20th century, Laird ended America’s long and controversial history of conscription, converting the military into an all-volunteer force while simultaneously releasing the funds that would develop the first A-10s, F-15s, F-16s, and Los Angeles-class nuclear submarines—all systems that remain foundational pillars of American military power.

The similarities between the problems that faced the Pentagon at the close of the Vietnam War and today are striking.

As the military draws down and rearms after Iraq and Afghanistan, the executive branch must make tough decisions regarding military budgets.

Today, each service is making significant strides towards developing new systems that promise to secure America’s role as the guarantor of global peace, making Laird’s successes in sustaining the Department of Defense’s budget and priorities more pertinent than ever.

Current lawmakers would be wise to take a lesson from Laird when weighing the political gain of cutting the military budget against making necessary preparations for the security of America’s future.

As Laird himself put it, “a politician would do well to remember that he has to live with his conscience longer than he does with his constituents.”

For an in-depth discussion on the historical and future implications of Melvin Laird’s leadership, join us on July 16th, when we host author Richard Hunt and his new book, “Melvin Laird and the Foundation of the Post-Vietnam Military, 1969-1973.”