‘Militarization’ Critics Want to Review a Pentagon Program After Ferguson. But Police Get Gear This Way, Too. 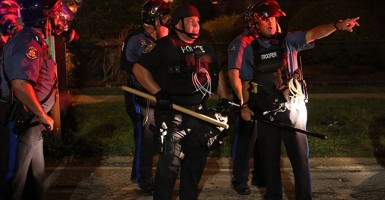 President Obama has led a chorus of cries for a review of a Pentagon program supplying “excess” weaponry and equipment to state and local police following events in Ferguson, Mo., but it turns out that another federal agency is a major player behind the “militarization” trend.

The Department of Homeland Security offers grants designed to increase the preparedness of state, county and local law enforcement agencies in the event of a terrorist attack or other hazards. Besides equipment, the grants cover planning, organization, training and exercise.

Missouri participates in the first two.

The Show-Me State first signed up for the State Homeland Security Program in October 2003, Mike O’Connell, communications director for the Missouri Department of Public Safety, told The Daily Signal.

>>> From Watts to Ferguson: The Pros and Cons of Police Militarization

Since then, DHS has awarded more than $169.4 million through that initiative to Missouri, which distributes the money among county and city police departments that apply for funding. This year, Missouri received close to $4 million.

Many observers of the police response in Ferguson, Mo., following the police shooting of a young black man took issue with the “military-style” equipment on display by the Ferguson and St. Louis County police forces.

More than three dozen jurisdictions around the nation got grants in fiscal 2014 under DHS’ Urban Areas initiative, David Inserra, an expert in homeland security at The Heritage Foundation, told The Daily Signal.

Cities are picked through an analysis of “relative risk of terrorism.”

Since 2003, Missouri has received more than $169 million in grants from the Department of Homeland Security

Two urban areas in Missouri, Kansas City and St. Louis, are among the dozens of participating cities. DHS this year allocated $3 million in Urban Areas grants to the St. Louis area, which includes the suburb of Ferguson.

The Ferguson and St. Louis County police departments purchased equipment with DHS grants, O’Donnell told The Daily Signal. He did not, however, respond to inquiries about what equipment was bought or how much money was awarded to each department.

Not About ‘Looking Cool’

The finite amount of money in the DHS grant programs must be spent wisely. All purchases should be justified by intelligence, hard plans, established training programs. This money should never go to ‘looking cool.’

“The finite amount of money in the DHS grant program must be spent wisely. … This money should never go to ‘looking cool,’” says @SBucci

Police agencies, however, can’t use DHS grant money to purchase weapons. Even so, Inserra noted, the grants have the effect of freeing up money budgeted elsewhere.

For example, if the budget of the St. Louis County Police Department included spending for ballistics vests and helmets, DHS grants covering that gear could allow the budgeted money to be applied to buy AR-15s and other firearms from private suppliers.

After Michael Brown, 18, was shot and killed Aug. 9 by Officer Darren Wilson, a six-year veteran of the Ferguson Police Department who is white, protests by black residents turned into violent riots and looting by some, prompting a muscular police response.

Events in Ferguson put a spotlight on the Department of Defense’s Excess Property Program, called 1033, which provides local and state police departments with surplus military equipment.

A review of  images typically distributed by news media by Heritage’s Bucci found that little of the pictured equipment actually came from the 1033 program.

>>> Where Did ‘Military-Style’ Police Gear in Ferguson Come From? Hint: It’s Not Necessarily the Pentagon

Still, Attorney General Eric Holder joined President Obama in calling for a review of the Pentagon initiative. In a formal statement, Holder said:

This equipment flowed to local police forces because they were increasingly being asked to assist in counterterrorism. But displays of force in response to mostly peaceful demonstrations can be counterproductive. It makes sense to take a look at whether military-style equipment is being acquired for the right purposes and whether there is proper training on when and how to deploy it.

Inserra and Bucci agreed the issue emerging from events in Ferguson is not that police departments have the disputed “military-style” equipment, but the way in which it is used.

The issue isn’t that police departments have disputed ‘military-style equipment,’ but the way in which it is used.

“Leadership and responsibility are the keys,” Bucci said.

In a recent briefing, Rear Adm. John Kirby, the Pentagon press secretary, told reporters that it is “up to local law enforcement to determine how and when and where and under what circumstances they use excess military equipment.” Kirby said:

We have rigorous compliance and accountability standards, and biannually, the Defense Logistics Agency spot-checks many of these local law enforcement agencies in the state to make sure that they’re keeping proper accountability inventorying — keeping an inventory of the equipment. But we do not legislate, we don’t mandate any kind of certain use. That is up to local law enforcement.