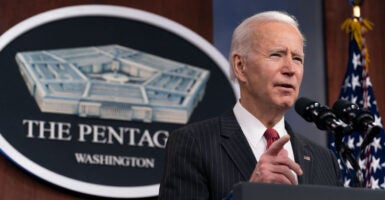 The Pentagon has announced that it will now conduct gender transitions for service members. This announcement comes on the heels of President Joe Biden’s recent executive order, which reversed the previous administration’s policy that barred transgender individuals from military service. (Photo: Alex Brandon/Pool/Getty Images)

It follows quickly on the heels of President Joe Biden’s executive order that he signed on the fifth day of his administration, setting aside the previous policy that barred service by transgender individuals suffering from gender dysphoria.

Under this new transition policy, individuals are expected to obtain a diagnosis from the military medical system that gender transition is necessary, and then present that information to their commanders. Under the policy, commanders then must act on that request within 90 days.

Once transgender individuals receive a diagnosis that a gender transition is “medically necessary,” they will receive the associated medical care and treatment at taxpayer expense.

The policy also states that once an individual’s request to change gender is approved, their administrative record will be changed to reflect that new gender, and the service member must then immediately adhere to the new standards for uniforms, grooming, physical readiness testing, and body composition.

Although the policy states that commanders are expected to “ensure readiness by minimizing impacts to the mission,” the policy is silent on how commanders are supposed to accomplish that task when service members go absent for significant periods of time to recover from medical treatments or to receive associated counseling.

The previous administration’s policy on service by transgender individuals sought to strike a balance between allowing as many individuals as possible to serve, while at the same time, ensuring that those who joined the military were medically fit and would not be harmed by military service.

For that reason, it specifically prohibited transgender individuals who were diagnosed with gender dysphoria from service, while at the same time allowing all others to volunteer and serve.

Former Secretary of Defense James Mattis developed that policy over the course of six months of study, during which he consulted with a team of medical experts and military leaders.

Biden set that policy aside after just five days in office.

The Mattis study found evidence individuals with gender dysphoria suffer severe anxiety and attempt suicide at approximately nine times the rate of the general population. He therefore recommended to the president that this condition—gender dysphoria—be considered disqualifying for military service, as it posed both increased danger to individuals and risks to the military readiness of their units.

Biden’s order set that policy aside, seemingly disregarding the dangers, thus exposing individuals already at greater risk from mental harm to the extreme stresses of military duty. His new policy also jeopardizes military readiness by introducing individuals who may, through no fault of their own, let their comrades down at the moment of greatest need.

Compounding those risks, the new policy means that military commanders must juggle yet another spinning plate—the need to accommodate service members who wish to change their genders with medical and other time-consuming treatments.

With all the other challenges the military must deal with, this new policy is an unforced error.