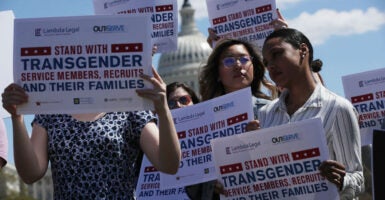 Many predict that shortly after assuming office, former Vice President Joe Biden will move to rescind the Trump administration’s 2019 policy on military service by transgender individuals.

That would be within his authority. Unless Congress intervenes, presidents set and revise entrance criteria for military service. Before he takes such action, however, he should consider the impact on military readiness. Unfortunately, there has been a near-complete lack of discussion and candor on that aspect.

Indeed, a recent report, led by three former military surgeons general, suggested the current transgender policy hurt military readiness by shrinking the pool of available recruits. What the report and surgeons general did not mention was the risk involved by allowing individuals suffering from a bonafide medical condition from entering military service.

The current policy prohibits transgender individuals who are suffering from gender dysphoria from entering service. In that respect, it is similar to many other medical conditions that prevent a volunteer from serving in the armed forces.

Gender dysphoria is a recognized medical condition characterized by a marked incongruence between one’s self-identified gender and one’s biological sex. For a diagnosis of gender dysphoria, that incongruence must be so great that it causes clinically significant distress or impairment in social, occupational, and other important areas of functioning.

Medical criteria for military service exists for a purpose: to ensure volunteers are free of conditions that would require lost time from duty or hospitalization, and to ensure individuals are capable of performing duties without aggravating existing conditions. These criteria protect both the volunteer from unnecessary harm and protect the military from accepting an individual who may not be able to complete military service.

There are hundreds of medical conditions that disqualify applicants from service, including asthma, plantar warts, or a history of anxiety disorders. Gender dysphoria, under current policy, is also a disqualifying disorder.

Why? It is not—as some have suggested—due to a bias on the part of the military, any more than the armed forces are biased against those who are suffering from asthma.

Instead, it is because both military and civilian medical data unequivocally reflects that transgender individuals diagnosed with gender dysphoria experience “high rates of mental health conditions such as anxiety, depression and substance abuse disorders.”

There is more stress involved in military service than in most other professions. Deployments take service members far from home in austere conditions away from support networks. Suicide rates among the military have climbed lately, to the point where they exceed the rate of the general population.

To allow an individual with gender dysphoria, already medically pre-disposed to anxiety, to enter a stressful profession such as the military would, frankly, be immoral.

This does not even get into the discussions of the additional costs and time lost by service members needing treatment for gender dysphoria. Those costs are real and the time spent away from military units is significant.

Why then do critics of the current policy seek to define this discussion as mere societal bias against transgender individuals? Because, seemingly, they can.

The media has categorically ignored the reams of medical data on the effects of gender dysphoria in favor of the more socially agreeable arguments that ascribe the current military policy to discrimination and prejudice.

It is an emerging pattern where a teacher can be fired for using the wrong pronoun, or a school can hide information from parents on their child’s gender identity.

America’s armed forces exist to defend the country and its national interests. Actions that reduce the readiness of these forces, such as modifying military entrance criteria to admit individuals with preexisting medical conditions, create layers of risks that are borne by our great service members, not those comfortably ensconced in Washington, D.C.

Congress and the president should carefully consider the merits before changing the current policy on transgender service in the military.