Is America’s Military Headed for a ‘Rocky’ Experience? 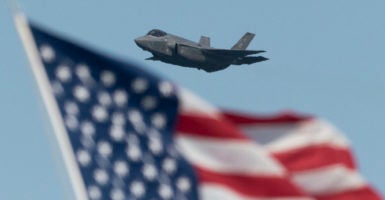 The film starts off with our hero, Rocky Balboa, having captured the heavyweight boxing title by finally defeating Apollo Creed. He’s happy, wealthy, and hugely popular. He finally has his mansion, a beautiful wife, fancy cars, and an entourage quite content to enjoy the benefits of being on his team and keeping the gravy train rolling.

In the fights that follow to retain his crown, Rocky easily defeats all comers. He doesn’t realize they are second-rate opponents who really don’t pose a threat to his bulldog approach to boxing and his innate ability to take some hits, power through, and triumph in the end.

He becomes not hubristic, but complacent, entitled, and ignorant of real challenges lurking in the shadows.

Restlessly impatient in the outer world is Clubber Lang—hard, brutal, confident, and hungry to dethrone Rocky and take his place as heavyweight champion. Lang resents Rocky’s fame, fortune, and cockiness. He senses a hollowness in Rocky’s position, that he’s grown soft, and that he’s avoiding a real challenge from a competent and better opponent because he has the luxury of doing so.

Lang has studied Rocky and has dedicated himself to methodically and relentlessly becoming a better, more lethal competitor.

Switch from the cinematic world to the real world, and it’s hard not to see the U.S. in the same position as our hero in “Rocky III.”

In 1989, when America was actively contesting the Soviet Union on a global stage, the Army had 770,000 soldiers on active duty; today it has 480,000. The Navy had 592 ships; today it has 290. The Air Force had nearly 30 fighter squadrons in Europe alone; today it has a total of 32 in its active component, and a mere six in Europe.

The U.S. at that time committed 20% to 25% of its budget to defense, roughly equal to 5% to 6% of gross domestic product, because that’s what was necessary to field a military able to be where it needed to be in sufficient numbers, quality, and competence to deter the Soviet Union from military action in multiple regions and to assure allies that the U.S. would be there to defend common interests in time of crisis.

Today, the Defense Department’s share of federal dollars has dropped to 15%, only 3.2% of GDP, enough to barely sustain what it has but not enough to replace equipment that has been used up in constant operations since 2001.

And certainly not enough to expand the force to a size capable of handling more than one major challenge. On average, America’s primary combat platforms are approaching 30 years old.

America’s combat experiences since the end of the Cold War have mostly come from dealing with minor opponents with no navy, air force, armor, or any means to prevent the U.S. from doing what it wanted.

Meanwhile, China has expanded its navy to 300 ships. It has invested heavily in shore-based maritime patrol aircraft and land-based missiles able to attack ships far at sea. It has built and militarized islands in strategic waterways, and has aggressively pushed regional neighbors out of contested areas.

Russia too has gained valuable combat experience in invading Georgia and Ukraine, conducting cyberattacks against the Baltic states, and salvaging the odious regime of Bashar Assad in Syria. It has renewed its military presence in the Arctic and has aggressively probed the seas and air spaces around NATO’s northern flank.

Both nations have committed major investments in hypersonic weapons, artificial intelligence, cyberwarfare tools, precision-guided missiles, and nuclear weaponry. Iran, meanwhile, on a lesser scale but perhaps with greater intensity, has doubled down on its support to terrorist groups across the Middle East. And North Korea shows no sign of slowing down, much less eliminating, its maturation of nuclear capabilities to include development of submarine-launched ballistic missiles.

And yet within the United States, all signs point to flat or even reduced defense budgets in the coming years.

Clearly there is no serious desire to fully recover from nearly two decades of constant operations against third-tier opponents. And there is certainly no intent to expand our military such that it can push back against growing challenges in several different regions around the world.

Rocky survived his beating from Clubber Lang and had the time and ability to recover, regather his sense of purpose, and reclaim his title as “Champ.”

Will fate be as kind to America?