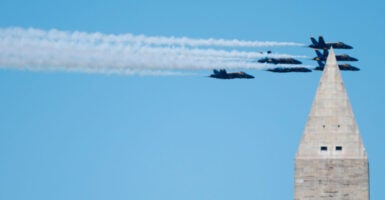 Partisanship creates substantial delays in the budget process and makes it more challenging to get to agreement on defense spending. Pictured: The Navy's Blue Angels fly over Washington, D.C., on May 2 to honor essential workers and health care providers. (Photo: Bill Clark/CQ-Roll Call/ Getty Images)

The House Appropriations Committee approved its fiscal year 2021 funding bill for the Department of Defense on July 14 on a straight party-line vote of 30 to 22.

If last year’s defense budget cycle teaches us anything, it is that this level of partisanship is a path for failure.

In 2019, the House Armed Services Committee fell for the trap of a partisan bill that, like this year’s defense appropriations bill, garnered zero Republican votes.

It was a far cry from 1948, when Sen. Arthur Vandenberg, R-Mich., then chairman of the Senate Foreign Relations Committee, worked with President Harry S. Truman, a Democrat, asserting that “politics stops at the water’s edge.”

The current partisanship created substantial delays in the process and made it more challenging to get to bipartisan agreement. It contributed to conditions that required yet another wasteful continuing resolution to fund national defense operations while members of Congress bickered among themselves.

By setting themselves further apart from the Senate, the House all but guarantees more delays in the appropriations process.

Also complicating the issue, the Appropriations Committee appropriated $3.7 billion less than the president’s budget request, which complied with the Bipartisan Budget Act and was also the amount authorized by both the House and Senate Armed Services committees.

That further widens the gap between the House appropriators and the rest of the federal government, which is abiding by the budget deal.

It’s a reduction made at a time in which it’s even more important to maintain a strong national defense. The coronavirus pandemic and aggressive Chinese action in the Indo-Pacific region highlight that there are real and substantive threats to American national security that require a strong and ready military.

While the United States operates under a testing moratorium, it maintains nuclear test readiness should the need to conduct a nuclear test arise, a goal that President Bill Clinton established and every president since has endorsed.

This misguided prohibition would cripple the nation’s ability to respond to an emergency that requires a nuclear test to ensure that the nuclear arsenal is working and will function properly if needed.

The appropriations bill also revives the idea of repealing the 2001 Authorization for Use of Military Force, which has failed multiple times in Congress.

Repealing the 2001 Authorization for Use of Military Force creates the real possibility that our troops currently operating abroad to protect us from terrorism will be left in the lurch without any legal authorization for their actions.

It also marries it with the repeal of the 2002 authorization, which actually should be advanced. It would be wise for Congress to separate the repeals of the two authorizations.

The bill also continues with a misguided congressional tradition of stuffing cancer research in the defense budget. This year, the bill allocates $512.5 million to the research program of numerous types of cancer.

Those resources should not reside in the defense budget, nor should they be managed by the Department of Defense. Those programs are so far removed from the Pentagon’s main objectives and comparative advantages that it should not be a part of its budget. There other organizations better suited for the task.

The bill also represents a nadir when it comes to budgetary flexibility and transfer authorities: It reduces the Pentagon’s transfer authority from the requested $9.5 billion to $1.5 billion, or 0.2% of the total appropriated funds.

Transfer authority is very important for sound fiscal management of the Department of Defense, since its budget is developed many months in advance, and this authority provides some nimbleness to respond to breaking world events. It’s a move that would make our nation less capable of responding to changing conditions.

The bill does have one very bright spot: It increases the number of F-35s to be procured in the coming fiscal year. The Heritage Foundation has recommended many times the acceleration of the procurement of the F-35, and it’s good to see that Congress wants to bring more of them to the force.

All in all, the defense appropriations bill’s partisan approach is going to generate unnecessary delays in the budget process, and should its provisions make it into law, it would make the Pentagon less efficient by reducing its flexibility to properly manage its budget.

It’s a bill that will require a lot of revision on the House floor and in conference with the Senate.