US Military Strength Rated ‘Marginal’ as China, Russia on Move 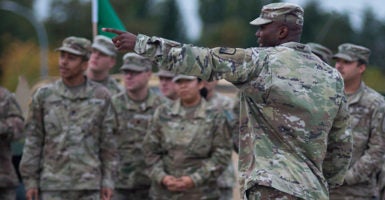 A noncommissioned Army officer instructs members of a brigade from Fort Hood, Texas, after their Oct. 17 arrival in Germany on the way to Poland to participate in Operation Atlantic Resolve. (Photo: Klaus-Dietmar Gabbert/Picture Alliance/Getty Images)

America’s military is stronger than before, but lacks the capacity to fight more than one war with a major power as adversaries such as China and Russia grow more ambitious, according to the 2020 Index of U.S. Military Strength.

The Heritage Foundation released the 500-page report Wednesday, grading all four branches of the U.S. military and its nuclear arsenal as “marginal” based on manpower, equipment, and other factors.

That’s middle of the road on a five-tiered scale that goes from the worst score of “very weak” to the best score of  “very strong.”

In a subcategory score, the Army got a “very strong” ranking for readiness, but its overall score was still marginal. The Marines improved their overall score of “weak” from the 2018 index.

“As a mother, as a veteran, and as a United States senator, I can tell you that this year’s Index of U.S. Military Strength highlights the real threats which keep me and many others up at night,” Sen. Joni Ernst, R-Iowa, chairwoman of the Senate Armed Services Subcommittee on Emerging Threats and Capabilities, said at an event pegged to the release of the report.

“We must stave off the threats just outlined and ensure both our allies and our adversaries never question our resolve, or our capability,” Ernst said. “We cannot allow tomorrow to be the day that China makes a calculation that taking Taiwan by force would result in anything but failure. We cannot allow Russia to decide the United States and our NATO allies would back down following a Russian invasion of the Baltic states.”

The Iowa Republican focused on threats to U.S. interests posed by Russia, China, Iran, North Korea, and terrorist groups—as does the report.

“In comparing the threats posed by Russia and China, make no mistake, folks,” Ernst said. “While the Russia strategy is to disrupt the United States, it’s China’s intent to absolutely displace us. China seeks to expand everywhere America is perceived to be retreating.”

The Heritage report calls for the Army to have 50 brigade combat teams; for the Navy to have 400 battle force ships and 624 strike aircraft; for the Air Force to have 1,200 fighter/ground-attack aircraft; and for the Marines to have 36 battalions. None would be a dramatic increase.

An Army National Guard combat veteran who routinely calls out government waste, Ernst stressed that being a fiscal hawk and a defense hawk are not mutually exclusive. She concurred with the Heritage report on the need to modernize the military and stop spending on outdated equipment.

These adversaries are investigating capabilities that seek to offset American strengths and military advantages, she said.

“The use of hybrid warfare and information manipulation coupled with these technologies gives Russia an asymmetric advantage in many of the regions it operates,” she said.

China, Ernst said, “has rapidly invested in antiship ballistic missiles, hybersonics, and artificial intelligence, while significantly growing the size and capability of their naval forces.”

“The goal: Challenge American primacy in the Pacific,” she added.

The Index of U.S. Military Strength doesn’t consider political calculations of where the U.S. military is or should be deployed, but instead is an examination of readiness.

On average, the U.S. has been involved in a war every 15 years since winning the Revolutionary War, said Dakota Wood, senior research fellow for defense programs at The Heritage Foundation and the editor of the index.

Going back to the Korean War, the U.S. has had roughly the same size fighting force for each conflict. To handle two major wars at current levels would cause a significant strain, Wood said.

The Air Force has the same number of squadrons today as during the Cold War, he said.

“What we’re saying is, the military needs to be bigger, it needs to have something other than 30- or 40-year-old platforms, and it needs to be able to train sufficiently so that it’s competent,” Wood said. “Because if you want to deter bad behavior by somebody else, if they don’t view you as competent, then there is no deterrence. So you are actually incentivizing bad behavior that leads to war.”

The index finds that the Army “has continued to increase its readiness,” but says it “continues to struggle to rebuild end strength … and to modernize the force for improved readiness in some units for current operations.”

On the Navy, the report says that “manpower presents a potential problem, as does obtaining adequate funding to increase the number of ships in the fleet more rapidly.”

On the Air Force, the report says: “Shortages of pilots and flying time have degraded the ability of the Air Force to generate the air power that would be needed to meet wartime requirements.”

On the Marines, it says: “Aviation remained one of the largest challenges for the Corps in 2019, driven by sustainment challenges within its legacy fleet of aircraft and shortfalls in key maintenance support personnel.”

Regarding the U.S. nuclear capability, the report concludes:

The U.S. is not taking full advantage of current technologies to field modern warheads that could be designed to be safer and more secure with increased effectiveness and could give the United States better options for strengthening a credible deterrent.