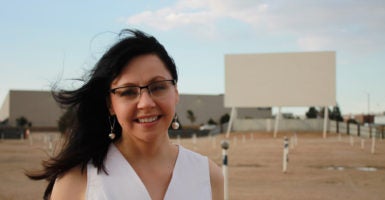 A Colorado woman who owns a drive-in movie theater in suburban Denver says she supports tax reform so she can expand her business and create more jobs.

“A rollback to 15 percent tax would be a windfall,” said Susan Kochevar, owner of the 88 Drive-In in Commerce City, Colorado, one of fewer than 350 drive-ins still in operation in the country.

The framework for tax reform introduced Sept. 27 by the Republican leadership in Congress reduces the current seven tax brackets to three, 12 percent, 25 percent, and 35 percent. On Friday, however, House Speaker Paul Ryan said the tax plan will include a fourth bracket for high-income earners.

Kochevar has a type of business that is called a pass-through, which is an establishment that “is taxed on the business owner’s tax returns through the individual income tax code,” according to the Tax Foundation.

A tax cut would enable Kochevar to grow her business, she says.

“I really need to expand. We turn away enough people to fill another drive-in on the weekends, but I don’t have enough money to expand, between the taxes and regulations,” she said. “So rolling that back would allow me to buy the property next door and expand.”

Cars park on the lawn for a screening at Susan Kochevar’s 88 Drive-In. (Photos: Ryan Scot Maceachern)

Kochevar said she would like to put up “an additional screen in the second lot.”

Kochevar, 54, a Denver native, got started in the drive-in movie theater business through her father, who got into it himself by first running a snack bar.

He then moved up the ranks and bought the drive-in theater that his daughter now owns.

Previously, it had run “unsavory” movies, Kochevar said. “So, of course, my dad ran better movies and just made a ‘go’ of that theater, and it has been in my family—next year, it will be our 42nd season,” she said. “He bought it in 1976, and it was built in 1972. It was the last one built in Denver.”

Besides being a longtime fixture in the community, she said, “We offer people an experience they can’t get anywhere [else], really,” she said, adding:

[It’s] low-cost entertainment. Most of the people in my community can’t afford to go anywhere else, so, and of course, we have been a really important part of the community in that way, entertainment, for 41 years.

A couple enjoys a movie at 88 Drive-In.

The 88 Drive-In, a first-run theater, shows three movies each night. Admission is $8 a person, and children under 12 are free.

Many drive-in movie theaters are named after the street they’re located on, and the 88 Drive-In is located on 88th Avenue, Kochevar said.

“You can see where people are able to bring their kids, and tailgate and share popcorn, and talk to their kids and families and friends,” she added.

The Denver-area drive-in has a snack bar with a variety of offerings, among them hamburgers, cheeseburgers, and nachos.

She also sells playthings especially for kids, too, including blow toys for $1 and light-up balls for $2. “So, every time parents come, they can get their child something,” Kochevar said. “They just love it. Besides, you can see the kids when they are running around at night.”

For Kochevar, a tax cut would mean hiring more employees and expanding the business so she no longer has to turn would-be moviegoers away.

“If I were able to buy the property next door, and expand, that would increase by at least another 10 people” she could hire, Kochevar said, adding: “It would allow me to pay people more, and who knows, maybe even offer them benefits.”

Michel told The Daily Signal in an email that the current framework for tax reform, which would condense the current seven tax brackets to three, would be good news for Kochevar.

“A 25 percent pass-through rate will be a tremendous benefit to small and medium-sized businesses,” Michel said, adding:

Lowering that top marginal rate from 39.6 percent to 25 percent means that businesses like 88 Drive-In can invest in new facilities and better equipment.

Kochevar said she is hopeful Congress will lower the top marginal business tax rate to 15 percent.

“Any tax cut will help, but I am disappointed that the rate is being negotiated up so quickly,” she said.

Michel added that tax cuts for businesses do not benefit the wealthy.

Some will criticize this as a loophole for the wealthy, or just a tax cut for the rich, but that’s not looking at the big picture. Currently, the top 10 percent of households and pass-through businesses pay 70 percent of the income tax, so any pro-growth tax reform must end up cutting some taxes on those folks who currently pay the most.

The story of 88 Drive-In shows how a lower tax rate can increase the private incentive to invest in the American economy and American workers.

That’s not a loophole. That’s a pay raise for American workers. A young woman enjoys the view from the roof of a car parked at 88 Drive-In.

Kochevar said she is ready for the tax reform debate, as she has “a huge history of fighting regulations in government.”

“The city … almost ran me out of business, but my customers fought back, and it took all of them. They fought back, about 20,000 of them, and the city wound up apologizing to me and admitting they couldn’t pull my business license or cite me for people’s driving habits,” she said. “They tried to claim I was a safety hazard.”

The city was calling for reforms, Kochevar said, that would have harmed her business, which is located in an industrial area.

They threatened to pull my business license and cite me personally if I did not fix the issues with the intersection. The city had neglected to make improvements following a major expansion of roads leading to the intersection and huge growth in the city.

The only options they would accept would have destroyed my business and were unsafe. For instance, one of their solutions was to run a line of cars through the middle of my theater.

This would be similar to running a line of people through the middle of an indoor theater.

Kochevar credited one of her employees, Jack Vazquez, 27, of Westminster, Colorado, for helping to save her business in 2014.

“He just had these mad Facebook skills, and so the Facebook page [had] about 6,000 [likes], and he built it up to 20,000, so when the city attacked us, and the police chief sent me a nasty letter, Vazquez said, ‘Let’s wait till 8 o’clock, and we’ll put this on the website,’”  Kochevar said.

Kochevar hopes her daughter, Kyleen, 23, will take over the business when she retires.

More than 24,000 people signed a petition to save the drive-in theater, which reads in part:

Ask the City Council of Commerce City to stop the police chief from harassing 88 Drive-In Theatre. The Police Chief is demanding that the 40-year-old drive-in … modify [its] business property to make up for the city’s road-maintenance inadequacies.

The Daily Signal requested comment from the City Council, but did not receive a response by publication deadline.

The press release and letters to Kochevar from the City Council may be viewed here.

In an email to The Daily Signal, Vazquez said working for Kochevar has been life-changing:

Working for Susan has been my pleasure and means the world to me. Thanks to the opportunity she gave me, I discovered my own talents, and with her support, [I] developed my skills into tools that I will take with me wherever I go.

Another friend also helped Kochevar with the petition and a press release to educate the public on the drive-in’s situation.

“So we put that [letter] up at 8:30 p.m. and just watched the numbers climb,” Kochevar said. “And … [Vasquez’s] skills on Facebook and now Snapchat and … Twitter and all the other forums with that are really awesome.”