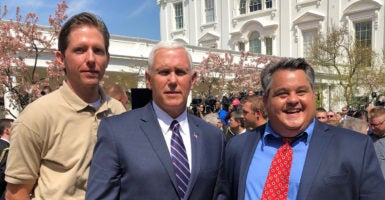 Joseph Semprevivo, right, founder of Joseph’s Lite Cookies, appears with one of his employees, Mike Folkerds, and Vice President Mike Pence at a tax reform event April 12 in the Rose Garden of the White House. (Photo courtesy of Joseph Semprevivo)

The overhaul of the tax code by congressional Republicans didn’t produce just crumbs for the business of a popular cookie maker based in Florida.

The Tax Cuts and Jobs Act has meant hiring, raises, investment in new equipment, and expanded operations, he says.

“It has had a direct impact on us,” Joseph Semprevivo, founder, CEO, and president of Joseph’s Lite Cookies, told The Daily Signal in a phone interview.

“We have added five more positions, we’ve expanded our factory, exclusively for … the sugar-free pancake syrup [and] we are launching into another business, a honey business,” Semprevivo said.

He said the new syrup, branded Joseph’s Sugarfree Pancake Syrup, also is gluten free and approved by weight-loss businesses and groups such as Weight Watchers.

“Since the tax cut, though, we were able to invest more money into promoting the [syrup] brand, expanding the brand, and so we decided to increase productivity and move it closer to our corporate offices in … Sebastian, Florida,” Semprevivo said.

It also capped at $10,000 the state and local tax deduction, which allows taxpayers who itemize instead of taking the standard deduction to deduct from federal taxable income any property and income taxes paid to state or local governments.

The package repealed Obamacare’s mandate for individuals to buy health insurance, increased the $1,000 child tax credit to $2,000, and provided a $500 credit for dependent children who aren’t minors.

Semprevivo, who took over the sugar-free cookie business his parents started in 1986, says tax reform not only has helped him branch out with the honey business but also expand cookie operations.

“Under the cookie business, we’ve invested in some software programming to take advantage of the … immediate expensing of depreciation,” he said, referring to another provision of the tax reform package.

House Minority Leader Nancy Pelosi and some other Democrat leaders dismissed the tax relief as insignificant, with Pelosi ridiculing what Americans got as “crumbs.”

But Semprevivo said the changes allowed him to give raises ranging from $3,150 to $5,100 a year to four of seven key team members.

Mike Folkerds, one of the employees Semprevivo said got a raise, has been married for about five years and has two little girls.

Semprevivo said he asked Folkerds what he planned to do with the pay increase.

“He actually got choked up and shed some tears, and he said, ‘The first thing I am doing is I am going to go out and buy a reliable car for my wife and my two baby girls to be in, so I don’t have to worry about that.’”

The car purchase, Semprevivo said, was a direct result of the tax cuts:

The car is made in Detroit by a union member … the car is transported, you know, to the state of Florida, he buys the car… that truck driver got paid … the salesman got his commission, the car dealership made a profit, and Mike … was able to pay the monthly payment for the car he financed. And the finance company made money. All those parties that made money all from a tax cut.

“We have been contacted by China, asking us to do an international label, a Chinese, a Mandarin label for our package, so we can export more to China,” Semprevivo said.

“They are going to take that to 20-40 pallets a month, so that other part of investment that was freed up from the tax rates, we are able to invest in the graphics and the new packaging print,” Semprevivo said.

Now, he said, his request to lawmakers is to make the tax cuts permanent, as some of the most popular items, such as individual income tax rates, are set to expire in 2025.

“My advice is, a) make it permanent, b) go deeper into tax cuts,” Semprevivo said, adding: