Liberals Are Ripping Tax Reform Bonuses. But They Celebrated $40 Under Obama Tax Cut. 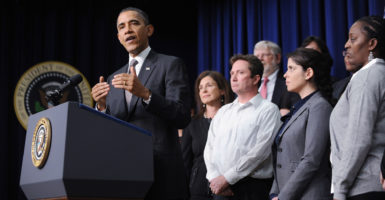 President Barack Obama speaks on Dec. 22, 2011, to urge House Republicans to vote on the short-term compromise passed by the Senate to extend the payroll tax holiday. The president argued the typical family making $50,000 a year will have about $40 less to spend or save with each paycheck if the payroll tax holiday expires. (Photo: Olivier Douliery/MCT/Newscom)

In late 2011, President Barack Obama’s White House promoted the hashtag #40Dollars to get the word out about an extra $40 per paycheck Americans would save in the temporary payroll tax cut.

Less than seven years later, prominent liberals are scoffing at $1,000 bonuses and pay increases that Americans are getting on top of tax cuts under the recent Tax Cuts and Jobs Act signed by President Donald Trump in December.

So far, 250 companies spanning 3 million employees have awarded bonuses or pay hikes, according to Americans for Tax Reform, which is keeping a running list. This week, major companies such as Home Depot and Starbucks announced pay increases.

Pelosi in January called the bonuses “crumbs,” “pathetic,” and “insignificant.”

Wasserman Schultz, former chairwoman of the Democratic National Committee during most of the Obama administration, recently said:

And then you spread $1,000 over the course of the year—to think of about how much that is—of course they get it all at once. But I’m not sure that $1,000 (which is taxed, taxable) goes very [far] for almost anyone.

In December 2011, going into a re-election year, Obama accused House Republicans of wanting to let the payroll tax cut expire on Dec. 31. The $40 per paycheck equals almost $1,000 per year. The White House website under Obama included personal stories from Americans about how they were helped by $40 per month, posting:

What does $40 mean to you? What will you and your family have to cut or go without if Congress refuses to pass the payroll tax cut?

Here are some of the stories we’ve collected so far. Tell us your own story here, or tweet @WhiteHouse with the hashtag #40dollars, to help us add to the list.

Congress extended the payroll tax cut in 2010, which was increased again shortly after Obama’s re-election.

Today’s agreement is a victory for the American people-they spoke out clearly & #40dollars each paycheck will make a difference.

In 2012, Wasserman Schultz said in a statement, after the extension of the payroll tax cut, “Today’s decision means that millions of American families will be able to continue to keep an additional $40 from every paycheck.”