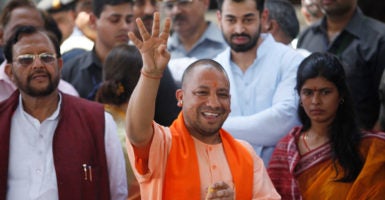 Yogi Adityanath, a Hindu nationalist priest and recently appointed chief minister of Uttar Pradesh, has cracked down on the slaughter and transport of cattle in the north Indian state, as cows are considered sacred in Hinduism. (Photo: Hindustan Times/Newscom)

Last week on April 5, a mob of Hindu vigilantes beat a man to death for transporting cattle in northern India.

Cows are sacred in the Hindu religion, but India is a multicultural country with many non-Hindu citizens.

This incident, along with the recent appointment of Hindu nationalist priest Yogi Adityanath as chief minister of Uttar Pradesh on March 19, raises concerns about the state of religious liberty in Uttar Pradesh.

Uttar Pradesh, home to approximately 220 million people, is the most populous state in India. It is also one of the poorest states in India, with three out of 10 people living in poverty within the state.

Since his recent appointment, Adityanath has largely followed Prime Minister Narendra Modi’s platform of targeting corruption and thus far avoided anti-Muslim or inflammatory rhetoric. However, Adityanath’s Hindu nationalist tendencies and previous statements regarding religious minorities is a cause for concern.

In one of his more famous comments, Adityanath accused Muslim men of conducting a “Love Jihad” campaign by converting Hindu women to Islam.

In response, he has called for Hindus to convert 100 Muslim women to Hinduism for every one Hindu woman converted. Even more concerning, he also said for every Hindu man killed, 100 Muslim men should be killed.

These comments become even more troubling when coupled with Adityanath’s arrest record. According to his election affidavit, he admitted to charges of attempted murder and defiling a religious site, in addition to several other charges relating to religious activity.

He also advocated building a Hindu temple on the site of an old, 16th-century mosque. This would be particularly inflammatory because the mosque was torn down in 1992 by Hindu nationalists and the ensuing riots killed about 2,000 people.

Since his appointment, Adityanath has cracked down on the slaughter and transport of cattle within Uttar Pradesh, demonstrating a willingness to act on his rhetoric.

Cows are a key source of meat for the Muslim and non-Hindu residents of Uttar Pradesh, and the crackdown has inflamed tensions between the Hindu and Muslim populations. The recent attack on the man transporting cattle is a perfect example of the danger this tension poses.

India is constitutionally a secular country, with religious liberty enshrined as a main tenet. This is an important consideration for a pluralistic society with a diverse population.

The international community should continue to closely monitor the state of religious freedom in India. Adityanath’s appointment comes amid a deterioration in religious liberty in India.

But it is in Modi’s interest to take a stand for religious freedom for people of all faiths. This shouldn’t be an afterthought. Rather, it should be a core tenet of Modi’s pro-freedom and pro-economic liberalization agenda.